Confession: I am not a fan of Missy.  It's nothing against Michelle Gomez...she played the role with enthusiasm.  I just didn't like the way she was written. She was more Anthony Ainley camp than the darker side of the character I prefer.  John Simm could play the Master as goofy and over the top but look at any scene that was just between him and Tennant.  Suddenly he strips away most of the antics and becomes a very sinister guy.  I never felt Gomez was given that chance.  She was always a campy character making snide remarks and ever so witty. I know a ton of people loves that, but I tire of it.  She always felt one note to me. So a whole boxset of Missy seems overwhelming to me, do I really want to spend four hours with this character?

Maybe they can change my mind on the character, maybe they can showcase another side of her.  Hell, they did a tremendous job with the War Master, somehow making stories that can revolve around the Master but not turning him into some anti-hero...he is still clearly an evil guy.  Could they strike a balance with Missy as well? Apparently, they cannot. The character is just as one-note as she had always been.  Always ready with a quip and a silly voice, always having more delight in the idea of being sinister than actually being sinister. I found myself increasingly irritated with the stories in this set, and the character left me colder than ever.  I said I wasn't a fan, but I didn't hate her. This set made me kind of hate her.

The opening story has her posing as a Victorian Governess.  I didn't really buy the premise, and I found the two kids she was taking care of to be boring and poorly acted.  Usually, Big Finish has good performances from all involved, people who really get the Audio format.  I don't know what was with these two, but I found them frustrating, and the goofy heists they are doing with Missy also left me cold. The music kept telling me I should be having fun. I was not having fun.

But maybe it was a fluke, there are three more stories, they can't all be bad.  The second story involved the spin-off media go-to Time Lord, the Meddling Monk.  A character with no real character that can be moulded into anything you need him to be for a story.  This time he is a bumbling idiot, posing as Henry VIII, marrying the wrong women hoping the Time Lords will rescue him?  But also Missy is here to steal a part from his TARDIS. And they nearly get married and they nearly get killed...and it was so campy I lost interest halfway through.  It is never good when I'm alone in my car and begin to yell "Get on with it!" at some point during the listen.

So we come to the third story, which is sort of a parody of America's Most Wanted, or shows like it, but gets more complex than that.  To be honest I didn't really click with it.  I think it had an interesting premise but even though I just listened to it I've already forgotten why everyone thought they were in a TV show. The episode is essentially a murder mystery, with the murderer turning out to be the Master's old TARDIS attempting to find a more sane pilot than the Master, the results often ending in accidental deaths.

The set closes out with what is, luckily, the best story of the set.  Missy is an evil overlord using slave labour to mine for something mysterious.  It turns out that the caves they are mining in is some kind of giant creature, and the slaves are all clones.  I liked the Missy was just a clear villain in the story, though the bits with Missy also being the leader of the rebellion with a comedy accent left me cold.  They just did the comedy accent in the previous story, so I don't know if they ever intended me to believe that it wasn't Missy the whole time or not, but it was painfully obvious, and didn't really have any meaning, as the whole rebellion plot is just Missy having some fun and killing time until she finds what she is after.

Ultimately, what she was after was "The Master TARDIS," some advanced TARDIS that can control other TARDISes.  This is the clear set up for some future story, either for the next volume of Missy, or maybe some run-in with the Doctor in another boxset.  The Master TARDIS thing isn't even brought up until the closing moments, so the weight of the development is minimal.  They should have made this object a clear goal from the beginning of the set, so the success of her evil plans could have more of an impact.

If it hasn't been clear, this set did not thrill me. Obviously, I started from a place where I'm not a huge fan of the character to begin with.  And without having Capaldi to spar with, I think Missy is an even emptier character than she was on TV.  It's all goofy voices and quips and there is rarely a moment where I take her seriously as a genuine threat. Big Finish has only amplified the things I found so uninteresting about the character.  Give me another War Master, at least those are filled with the Master being a genuinely evil jerk. 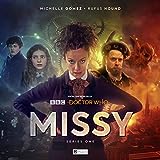