Odd events have been witnessed in the diminutive village known as Swammcombe. Unexpected lights in the sky. Insanity plaguing many a person. Even spaceships have been rumoured. Counter-Measures' Allison Williams is resolute to get some answers to the many questions that these events pose. She is not alone as her friends and associates Gilmore, Rachel and Sir Toby make their own efforts to look into the case. It becomes clear that the Elite Visualisation tests, and Open Band - the devoted followers of Lord Cavall -are at the core of the mystery needing to be unearthed. Cavell's acolytes insist his cause his just but that is open to question given how many require specialist psychiatric help. The biggest question to answer is how the King under the hill connects with all the odd events swirling around the village...

The story hits the ground running in that our regular team of investigators have already made some effort into uncovering more information about the somewhat absurd goings-on. One strand that Rachel is drawn to is the serious consequence that Open Band's mind expansion activities. She visits one of the victims who can only but rant in a secure mental health ward – whilst very vocal there are previous few overt answers to the mystery. Undeterred she sets up a laboratory and monitor base in order to tease out further hard nuggets of evidence.

Meanwhile, Allison puts her own sanity at risk but she is a dab hand by now at such enterprises and manages to play a key role in the resolution of the crisis. The male contingent of Counter-Measures get involved by impersonating a documentary producer (in Gilmore's case), and playing the sycophantic autograph hunter (as per the chameleon that is Sir Toby). All these goings-on feel by now familiar but in the best possible sense of a well-oiled machine and the fast pace (leading to a scant running time of 81 minutes) is a definite asset. As the denouement unfolds it becomes clear that the main antagonist is not one most listeners would have assumed, and something very disturbing indeed has been happening underneath the seeming reality...

The acting from the regulars is as nuanced and spontaneous-sounding as we have come to expect. This month sees The Legacy Of Time released with Counter-Measures 'reunited' with the Seventh Doctor and Ace. Initial interest in this range back in 2012 was certainly generated in some part due to this Doctor and Companion team encountering Gilmore, Alison and Rachel in the sublime Remembrance of the Daleks. However The Hollow King works just as well as a brand new introduction to the range, as a continuation, such is the focus on showing both individually and collectivity how the team function and perceive their world around them.

Ian Potter has constructed a strong story that works well on its own but also will now serve as the official first stanza in the Third Season of the New Counter-Measures (with Dalek and Movellan stories on offer in early 2020). Based on this evidence there is plenty of fuel for a long-running range to reach it's tenth anniversary.

The first set of interviews gives plenty of focus to Timothy Bentinck and Simon Williams' joint work on the iconic BBC radio show The Archers, and how it is to play a markedly different character in this particular Big Finish Range. Bentinck also played Allison's father in the Forgotten Village story in 2014 despite being a handful of real-life years older than Karen Gledhil.

The second and concluding group of interviewee material is notable for comparing radio acting to dancing in that the body will follow a certain number of movements despite (obviously) not being needed for this particular medium. Also of interest is how both Jessica Regan and Kate Russell-Smith elaborate on what it is like to play several roles in the same play. They bring enthusiasm and dry wit to their craft of breathing distinct individual life into those parts. 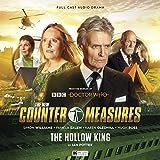 The New CounterMeasures - Series One

After the Who Killed Toby Kinsella standalone release, another eagerly awaited full series of adventures for the Counter Measures team is available – being now set in the Seventies time zone. For the most part it continues the fine work of its predecessors.

The box set’s opening story is entitled Nothing to See Here. Starting off with the shock of Gilmore being involved in violent armed robbery, it soon is made clear that the rest of the Group were fully aware of his choice to risk his safety by going undercover. The main story concerns invisibility and the threat of long-term use of this ‘special ability’ that causes loss to one’s mental equilibrium, and overall identity. The themes and plot mostly concern just how vulnerable a seemingly rock-solid soldier like Ian can be, when under the influence of an unprecedented invention, with unknown powers.

Guy Adams has provided a serviceable enough script and storyline, although it never quite goes beyond third gear in terms of tension and jeopardy. The majority of the antagonists are not quite imposing enough, and the deranged main adversary evokes more pity and concern for his safety than anything else.

The second story of the four is the work of Ian Potter - who has particular experience in the Companion Chronicles range - and is evocatively called Troubled Waters. With a relatively limited cast, the story makes good use of a submarine location (with latent nuclear capabilities), and explores aspects of distrust, claustrophobia and distorted views of the 'best possible' future for mankind.

Coupled with a strong central mystery over why the submarine has gone ‘off grid’ and what caused its crew to mysteriously vanish, the listener is fully engaged with this play’s unveiling of various answers. It builds well on the core theme of identity from the prior story, and sees all of the main quartet of regulars having their integrity and defining characteristics assaulted.

The penultimate story of the set sees another sharp change in setting and story inspiration. Christopher Hatherall’s The Phoenix Strain has both a connection to The Birds – one of the seminal Hitchcock movies – and feature films from the time the story is set in, concerning animals running amok. Whilst involving vicious birds, there is also a theme of chemical engineering, designed against a very specific ‘enemy of the state’.

Operating on a much larger scale of action than the first two stories, this involves several antagonists. They have rather dubious principles, but are not directly connected to one another, and their agendas and methods are very dissimilar. The play does well in keeping followers uncertain over just which of these troublemakers actually has the more troublesome moral code.

This story really works well on initial listen, and has enough meat on its bones to stand up to repeated exposure. It perhaps is the most seamless of the four adventures, in terms of reflecting popular culture of the decade in question. There were many 'disaster movies' working their influence on the general public, and somehow they proved to have a winning mixture of paranoia and thrills, that kept justifying more being made in double-quick time.

The concluding story for this collection shares its title with the prototype of what ending up becoming the immortally beloved City of Death. However, A Gamble With Time is markedly different in overall story beats, and how the time travel trope is used. Allowing our four regulars to all go undercover as they investigate dealings between Gus Kalworowsky and Lady Suzanne Clare, twists and turns are unleashed with each successive track. Despite appearing to be harmless to most onlookers, Clare is actually a ruthless arms dealer who is intrigued by Gus’ supposedly alien time travel technology. One aspect that is kept from David Fisher’s markedly altered proposal, is the setting of a casino.

John Dorney's story just pips its predecessor to the post of being the standout, and features well-drawn characters played with full gusto by the supporting cast. Clare is one of the best Big Finish villains to originate, from a line that is divergent from the main Doctor Who releases.  She seems always one step ahead of even the smartest of people, and the ending is left open for her to wreak havoc in future.

This set of mysteries is notable for having a very loose structure in terms of inter-story continuity. Whilst presumably listeners are meant to approach the quartet in chronological order, in practice there is little to no difference rendered by selecting an arbitrary sequence instead.

The main cast continue to provide excellent portrayals, and clearly enjoy the different situations and character moments that they each receive. This is a particularly good collection in terms of advancing the Gilmore/Jensen relationship. Williams and Salem clearly know how best to convey chemistry and connection, through this particular form of audio adventure.

Sir Toby is notably more benign following the events of the Who Killed.. two-part release, from earlier in 2016. Ross still plays the role with depth, and in an intriguing manner, but his darker edges are less conspicuous. His challenging of Lord Balfour is particularly riveting. Yet we also see this calculating political being take a moral high ground, rather than being more pragmatic, as so often was the case in his earlier stories.

Perhaps Gledhill's Allison has the least notable material, apart from her undercover work in Gamble, and the brainwashing/’romance’ she is subjugated to in Troubled Waters is just a bit too similar to previous stories, in the original Counter Measures range. Also, I continue to find much of the music a little too harsh, and the main theme is something I personally choose to skip.

However, other fans of both Doctor Who and of these characters that first showed up in a top-drawer 1988 TV serial, may enjoy the compiled music that features as one of the bonus tracks. The behind the scenes material continues to be enjoyable, with a particularly nicely done ‘as live’ insight into how happy the regulars were to hear they would be recording further original stories, after this current run.

This set does a fine job of building on the foundations of the first story, which brought the Counter Measures team into the markedly different decade of the Seventies. It demonstrates with some flair just how much there is still to be uncovered, by this group of smart and enterprising talents – whether political, scientific or military.