Torchwood: Aliens Among Us - Part 2

After an eclectic opening boxset pitting its titular team of ‘secret’ agents up against sentient hotels, vengeful brides, increasingly destructive terrorist cells and an extraterrestrial gangster newly appointed as Cardiff’s mayor, what could Big Finish possibly have up its sleeve next for their self-proclaimed fifth season of Torchwood? That’s a fair question, and with Aliens Among Us – Part 2 comes the adrenaline-fuelled, alien STD-carrying answer.

If James Goss’ brilliantly-named sophomore instalment of Season Five, “Aliens & Sex & Chips & Gravy”, didn’t seem enough like a quintessential Torchwood outing, then “Love Rat” more than fits the bill. From its unashamedly risqué opening moments, involving Captain Jack’s not-so-romantic run-in with an unknown courter, to its hilariously absurd consequences witnessed throughout the hour, “Love Rat” is about as adult, gag-ridden and downright ridiculous as the show’s ever been under Big Finish’s stewardship.

As one would expect at this point, though, the play’s ever-delightfully energetic cast take the increasingly bonkers events depicted here in their stride, with John Barrowman naturally relishing the opportunity to transform Jack into the ultimate sexual provocateur for one hour only, while Eve Myles’ bemused Gwen and Jonny Green’s stern yet susceptible PR agent Tyler both suffer the consequences with gut-wrenchingly comedic results.

Those hoping for scribe Chris Cooper to push on with Season Five’s underlying secret invasion plot arc might need to take a chill pill here, since barring a cameo or two from Rachel Atkins’ still gloriously malevolent arch-foe Ro-Jedda, there’s little in the way of narrative substance or deep thematic exploration to be found amidst all the coital antics. But even so, complaining seems churlish when, by letting its hair down for once, one of Doctor Who’s darkest offshoots to date offers up such a constantly entertaining hour as this.

That said, anyone concerned that Torchwood’s latest run might follow the traditional US TV model – and indeed arguably Miracle Day’s approach – of marginalising any major plot arcs until its final instalment, especially as we reach its halfway point, can breathe easy as they stick on Aliens Among Us’ sixth chapter. As teased by his familiar silhouette gracing Part 2’s cover, Season One antagonist Bilis Manger has returned to wreak havoc upon the lives of the Torchwood team, his intentions no less sinister than before.

Murray Melvin, true to form, once again injects this mysterious adversary with all the understated menace and enigmatic omniscience for which fans knew and loved him back in 2007. It’s thanks to his accomplished performance that as Bilis adopts the role of a kindly Caretaker at the tower block where Mr. Colchester and his partner have coincidentally moved in of late, listeners can’t help but perch themselves at the edge of their seat in nervous anticipation of the turbulent conflict and inevitable tragedies to come.

Placing Colchester centre-stage doesn’t do “Kill” any harm either, affording Paul Clayton’s constantly courageous yet endearingly vulnerable – and, thanks to his rather unique work-life balance, multi-faceted – civil servant with some much-needed development, as he realises to a harrowing extent the devastating personal consequences which come with taking the deadliest career path available to Welsh job-seekers. How this compelling character arc will resolve itself by season’s end remains to be seen, but we’re just as curious to see this develop as we are to discover what ominous teases of another old foe’s arrival portend for the second half of Season Five.

And what of Ro-Jedda’s doubtless sinister machinations behind-the-scenes? Evidently unwilling to allow Aliens Among Us to lose the gratifying plot momentum gained by Episode 6, Janine H. Jones dives headfirst into this mystery via a topical tale of exploitable employees forced to work inhumane hours just to earn a living. Enter Tyler Steele, whose work at the mayor’s office – and intrigue at noticing the peculiar habits of a delivery worker – sets him on a collision course with the unsettling truths behind Cardiff’s otherwise welcome upsurge in employment rates.

Just as Green’s undeniably flawed wannabe journalist served as our entryway back into the covert, casualty-laden world of Torchwood in the season premiere, “Changes Everything”, so too does “Zero Hour” offer listeners the opportunity to experience the latest weekly threat to the Welsh capital’s fragile sanctity from the perspective of a relative outsider, as Tyler soon finds himself in treacherous waters with little-to-no help available from Gwen while she tackles toddler troubles or Jack while he investigates matters further afield. Thus we’re afforded a far deeper insight into a morally complex rogue who’ll cross almost any line to survive, yet shows visible dismay at witnessing his city on the brink of societal collapse.

Meanwhile Gwen’s familial woes at home highlight another ongoing character arc which could so easily get forgotten amidst all of Part 2’s other hi-jinks – namely her possession by a still ambiguous alien entity driving Mrs. and Mr. Cooper further apart by the day. No doubt tensions will come to a head in the final four episodes of Season Five due for release next February, but it’s rather frustrating how frequently such a pivotal journey for one of the show’s longest standing protagonists ends up side-lined so as to allow other plot threads to breathe. At this rate, the true feisty heroine whom Myles usually portrays to great effect might not re-surface for most of the run, a crying shame given how Aliens Among Us supposedly marks Torchwood’s triumphant full-scale comeback.

Last but by no means least, Aliens’ second mid-season finale takes the underlying political messages seeded within the previous seven episodes and amplifies them tenfold, namely by bringing ideas such as #BlackLivesMatter and hate crime to the fore as Sergeant Andy Davidson appears to gun down an innocuous immigrant worker in cold blood. As ever in a series whose mother show straddles the line between sci-fi and fantasy, there’s far more than meets the eye in this instance, but the increasingly relevant issues at hand lend “The Empty Hand” a greater sense of moral gravitas than most Torchwood romps can muster.

Writer Tim Foley admirably never trivialises his weighty subject matter, allowing his characters to discuss the implications of Andy’s actions at length and affording Tom Price’s oft-befuddled police officer a long overdue extra layer of moral nuance in the process. Thankfully, though, he’s similarly aware that such intricate discussion points can scarcely receive closure over the course of a single one-hour drama, his focus primarily on how the Torchwood team’s struggle to resolve what soon becomes a citywide crisis feeds into Ro-Jedda’s long-term game-plan, and – after a belated intervention from the eternal Time Agent – the lengths to which Jack will go to protect humanity at all costs.

Any fan will attest that the latter thematic strand has often proved a narrative goldmine for the series, particularly as Children of Earth drove the man who’d bested gas-mask zombies, Daleks and the son of Satan himself to take the life of his own grandson in the process. Similar to how that fateful decision carried major ramifications for Jack’s role in Miracle Day, so too do the actions taken here by the once and future Face of Boe indicate that life at the Hub might never truly be the same again. Of course, anyone who’s finished the boxset will know a further crucial reason why Part 3 promises to potentially uproot our understanding of Torchwood’s past, presence and future, and anyone who hasn’t will need to pick Part 2 up to discover as much for themselves.

Speaking of which, in case it’s not already glaringly obvious by now, Aliens Among Us is fast shaping up as one of Torchwood’s finest hours to date, making the series a must-listen for any devotees who’ve longed for the show’s return to TV. It’s safe to say that Season Five has a hell of a lot of dangling plot threads to tie up in Part 3, from Gwen and Rhys’ fractured relationship to Ro-Jedda’s endgame to that plot twist awaiting listeners at the end of “Empty Hand”, but based on the opening two-thirds of Season Five, finding out how events reach their climax will doubtless prove one of the biggest early highlights of next year. February 2018 is apparently where everything changes, and we’re certainly ready.

Torchwood - Aliens Among Us: Part 2
Not Availa

Doctor Who - The Thief Who Stole Time

Romana has been cruelly abandoned by her old Time Lady friend, and the Doctor is left, to not only clear up a mess with the furious locals of the planet Funderell that concerns the 'accidental' killing of their God, but also to try to deduce what the Time Lords have done to the fascinating planet....Oh yes, and the TARDIS has been lost, absorbed by the ever moving liquid skin of the planet's surface......things are looking grim.....

The Thief Who Stole Time is essentially parts three and four of the previous story, The Skin of the Sleek - and starts, in true classic Doctor Who style, by quickly and efficiently resolving the cliffhanger from the previous episode. As with the the first two parts of this story, not only is the story telling first rate but the world building is fantastic and quite dazzling.

I felt that the only (very slight) let down is that new Time Lady Sartia (Joannah Tincey) descends into a moustachioed twirling villain far too quickly, readily explaining her dastardly plans to anyone who will listen - but this is quite fun in a way, and harks back to the time of simpler writing. It didn't detract from my enjoyment of this story as a classically staged four parter.

The standout performance for me was Tom Baker himself, who seems to be reaching new levels with the character through Big Finish, and is just an absolute joy to listen to for anyone who enjoyed his era, particularly the later years. I actually laughed out loud at a number of his one liners - yes they are expertly written by Marc Platt, but Tom absolutely owns every word by the manner in which he delivers them. Lalla Ward is also excellent of course and delivers some real gravitas to the scenes between her and Sartia, when she struggling to understand why someone who she thought of as a friend, should actually despise and resent her.

The Skin of Sleek and The Thief Who Stole Time are essential listening to any fan of the Baker era. Not to be missed.

Both stories are available now from Big Finish as a digital download or an audio CD. 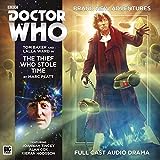