Billie Piper was a key ingredient in the success of the Doctor Who revival.  Her portrayal as Rose was the audience's way into a world that had been closed up for many years.  Through Rose, the audience was discovering the many layers of this universe...the Doctor, the TARDIS, Daleks, Cybermen, and so many new corners of the universe.  Despite only appearing on the show for 2 series, each with a different Doctor, Rose made a lasting impression. Even after she left Rose's absence was felt until the end of the Tenth Doctor's run.

Despite all that...I'm not the biggest Rose Tyler fan.  Don't get me wrong, she was the companion when I discovered my love for the show, and I was really sad to see her go.  She was so integral to my love of the show, that at the time I didn't know how the show could go on without her.  Obviously it did, and as I then went back and discovered more companions, my love, slowly faded for Rose.  These days, I find her adventures with the Ninth Doctor to be top-notch, but I don't really dig the rapport she developed with the Tenth Doctor. Her return in Series 4 marked the moment I began to sour on the character.  They first re-introduced her as a more mature version of the character. The moment she finally reunites with the Tenth Doctor, however, she reverts back to a whiny teenager with a super crush.  And then rewatching the Second series only reinforced how clingy she was.

At any rate, Big Finish's latest spin-off series focuses in on Rose and her adventures leading up to her return in Series 4.  Using a device called the "Dimension Cannon" she is jumping to various different realities, trying to find her original home and find the Doctor before the universe ends. It's a decent premise, but some details were majorly flawed which hurt my enjoyment of the set.

In the opening episode (The Endless Night), Rose arrives in a version of Earth and meets a new version of Clive (a character only seen in her debut appearance, who first tells her about the Doctor), and versions of her parents who only dated a year, never married and never had Rose.  But when their sun goes out, Rose is left with the decision of having to save herself but leave them all behind to die. At least in this episode, she has this moral dilemma and then is taken hostage when this version of Pete discovers her way out.  Unfortunately, the reason for getting caught up in events falls apart in subsequent episodes.

For some reason that I genuinely couldn't wrap my head around, when Rose lands in a new reality, her first order of business is to find her parents and figure out how they are different.  For some reason knowing how they are different will tell her how this version of universe diverged.  This is pretty narcissistic. I suppose she is looking for clues to the Doctor in each reality, but she seems to just always focus in on her parents.  In the second episode (The Flood) she lands in a version of Earth that has been raining for 30 years and instead of Pete and Jackie having Rose, they had a boy named Rob.  Why Rose gets so hyper-focused on her parents when her mission is to find the Doctor doesn't really gel for me. Clive has joined her this time and he seems to be actually trying to look for clues to the Doctor, but he falls in love with someone instead.  Eventually, they leave with no headway truly made.

On her third outing, Ghost Machines, Rose is joined by Pete and they immediately recognize this as not Rose's original Earth and likely not to have a Doctor.  They then don't immediately leave. Rose claims that if they can figure out how the reality changed they can use it as a "signpost" to her reality.  How?  That part is skimmed over as if it doesn't matter...but it is the only reason they are apparently hanging around universes in which the Doctor doesn't exist.  Oh but also they are on a major time crunch...they need the Doctor now...but why not look around a place he clearly is not?  This simple flaw really disrupted my enjoyment of the set.  It could have been as simple as a line about how they can only use the Cannon once a day, so they are trapped in each reality for at least a day.  But they can come and go whenever they like as far as they are concerned.  There is no reason to stay around a version of Earth which seems to be overflowing with graves.

The set closes out with Jackie joining Rose on an adventure...for some reason.  They end up in a world where another planet is going to crash into Earth, and everyone in Rose and Jackie's old stomping grounds is throwing The Last Party on Earth.  It's fine, but despite initially deciding to leave immediately because it is the wrong place, they stick around to get to know everyone they know's alternate versions anyhow.  I'm not sure I see the point in sticking around if they never help, they just feel worse about having to jump universes again.

I was indifferent to this set. Huge fans of Rose may enjoy hearing some of the old gang (though Mickey is notably absent), but really I had trouble getting into the premise.  Rose gets caught up in the events of these different realities like the Doctor would, but she never really helps things or solves any problems.  She just gets emotionally attached to different versions of her family before leaving them to die on their world and start it all over again.  It felt repetitive, and maybe just one Big Finish Spin-off too far. 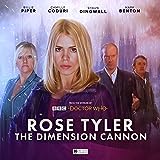 When Doctor Who returned with Rose in 2005 its necromancer in chief, Russell T Davies, was understandably nervous of going too far too soon. Both in terms of keeping the new mystery at the heart of show a mysterious tease (War? What war did he fight in? What planets couldn’t he save?) and in keeping the show’s past at arm’s length. Let the public learn to love the show again first, then introduce them to the potentially embarrassing extended family. Don’t scare them off straight away.

But Davies’ affection for the show he grew up with pure and true, and it makes this Target novelization a unique case across the hundreds of titles to carry the Target logo. It’s not remotely unusual for Target books to deepen and expand on the original script. But this is the only case I can think of where the author is indulging himself with all the back references and fan service he couldn’t the first time around. The job is done. The crown has been passed on. Now it’s time to play.

And so Clive’s history is greatly developed. Not only does his collection feature more than just Christopher Eccleston’s face staring out of historical events, but all the Doctors past and present, from Hartnell to Whittaker and even beyond have their own files on the shelves of the shed. And the origins of his obsession are revealed as being his own father’s presence during the events of Remembrance of the Daleks. But this book looks forward too. Davies has said he considers this itch scratched now, and being able to say that he wrong one entry in the beloved range of novelizations is enough for him. Nothing he’s said could be more convincing of that than the way he approaches this take on the Doctor and Rose. In a move that feels almost slightly greedy, he reaches into his own show’s future to plunder it for character beats that, on TV, were spun out for much longer. So, in this text-based universe, Rose and the Doctor have their discussion about his world having been destroyed and being the only survivor here rather than in The End of the World. A lot of the material about the Tyler family finds it way here from its original placement in Father’s Day and similarly, Mickey’s backstory from Rise of the Cybermen is included and expanded here. Indeed, Mickey overall is given far more sympathetic treatment here than in the televised episode. Another suggestion of Davies seeing this as his one shot at the character in prose, with no future installments over which to develop Mickey's good points.

That will make for an interesting puzzle for future writers if the range ever gets around to novelizing such episodes – but if the Doctor winds up revealing the death of his people in the Time War to Rose twice, well, such continuity issues are almost a Target tradition going right the way back to Ian and Barbara’s multiple choice origin stories. In fact, even within this initial set of four releases, there’s an element of that – Davies’ Rose introducing a whole supporting cast for his version of Mickey (who, in another universe perhaps, would be the star of his own single-camera Channel 4 sitcom about a loveable ne’erdowell and his mates), all of whom have apparently evaporated by Colgan’s The Christmas Invasion, which notes that Mickey’s a bit of a loner who doesn’t make friends easily.

There's a lot of brand new material in Davies’ book, too, both in fleshing out the bones of the plot and in the way Ian Marter famously used to with his novelizations – pushing the violence and horror well beyond anything that could have been gotten away with on television. The more in depth look at the characters is a delight. As soon as the passing line of “Wilson’s dead,” in the television script becomes an entire chapter of Wilson’s history at Henrick’s down the decades it’s clear we’re in for something special.  The increase in the violence isn’t quite as successful. There are scenes where the Autons utilizing bladed arms and so on are ingenious and clever, but at other times the detailed descriptions of people being hacked to pieces, or having the back of their heads blown off by Auton guns seems to sit badly with the general tone of the book and to be included just for their own sake.

As with The Christmas Invasion, Jackie Tyler herself, Camille Coduri, takes on narration duties. The sheer pace of storytelling here leaves her less room to inject her own breezy reading style, and she seemed more at home approximating David Tennant’s mockney than dealing with Christopher Eccleston’s Salford tones (which here wind up more generically ‘Northern’). However, her recapturing of the Tyler matriarch is as perfect as ever (and she clearly relishes some of Jackie’s new lines like “Rose Tyler. You tart.”) And she again matches Billie Piper’s Rose so well that at times you’d be forgiven for thinking Piper had shown up in person. Coduri’s reading of the various tragic backstories of characters like Clive and Mickey is nicely sympathetic too, with a tangible sense of sitting across a kitchen table from her as she tells a new neighbour all the sad, sad stories of the locals right after they’ve left the room.

Having Russell T Davies back on anything Doctor Who is always a massive treat and his revised take on Rose is no exception. Matching his prose with as warm and engaging a reader as Camille Coduri, it makes the audiobook a shot of pure nostalgia and a wonderful way to take listeners back to where it all began (again).