The Robots: Volume One (Big Finish)

Despite my love of the ongoing Eighth Doctor adventures I have to admit, I am not the biggest fan of Liv Chenka.  She has grown on me, but overall I find her to be a fairly drab character.  She's always so cynical, mistrusts everyone to a fault and, quite frankly, I find Nicola Walker's performance to be bland and boring.  From time to time, I have found sparks in the character...but on the whole, I tend not to like her that much.  I was disappointed when Molly was phased out in the Dark Eyes series and Liv took on the companion role.  Granted, Ruth Bradley (who portrayed Molly) was the main reason for the change, but I loved the rapport between her and McGann, and I still feel (even after nearly 5 years) that the rapport between McGann and Walker leaves something to be desired. Luckily, I have enjoyed the character of Helen Sinclair. And with Mark Bonnar so often along for the ride as the main antagonist, McGann always playing the Doctor superbly, as well as a ton of great scripts...the (in my view) deadweight of Liv Chenka is forgivable.

So...in this modern age of Big Finish, where every small part in Doctor Who is just as likely as anyone to get their own spin-off, we arrive at the Liv-centered series The Robots which is purportedly meant to be a 12 part (over 4 sets) story that takes place on Kaldor in the year Liv stayed behind (which was during the boxset Ravenous 2). I can't say the idea had me terribly enthusiastic.  Not a fan of Liv and generally indifferent to Kaldor and the titular Robots (their original story with Tom Baker is great, but I can't say I ever felt they needed too much expanding), this was bound to be an uphill battle of enjoyment for me.

The stories are, as per usual with Big Finish, excellently produced.  But the stories don't feel so original that I was won over by the set.  The opening story, The Robots of Life, introduces Kaldor nicely enough, and it sets up the relationship between Liv and her sister Tula. The idea of the overarching story is about how Kaldor copes with the quickly evolving robots. Their tech is getting better, and it's upgrades are moving faster.  And it seems one robot may have even achieved sentience.  It's an intriguing time for the planet.  Beyond the set up of the world and something involving a doctor losing patients, I have already forgotten most of this story.

The second story (The Sentient) is likely the best of this particular set, involving a young artificial girl, meant to serve as a perfect child to be adopted by some parents longing for offspring...but her AI has some quirks.  Mostly that she is contemplating genocide. It's at least an episode that delivers on the promise of a story exploring AI, robots, and all the moral implications within those topics.

The final episode is Love Me Not which is such a boring standard story of a guy who tries to use a robot to replace his dead wife and how it stunts his grief process.  This episode might have felt really innovative if it had been produced for The Twilight Zone or The Outer Limits back in the 60s. As it stands it just felt so predictable.  It just didn't have a twist to make it feel worthwhile.

The story of a planet, similar yet different to Earth, trying to deal with their ever-expanding tech of robots and the implications of AI is not a bad idea.  In fact, the Battlestar Galactica spin-off Caprica had a very similar premise.  And just like Caprica, this doesn't deliver on the topic as much as you'd hope. I still remember the sting of watching the Caprica finale, and they spent the last five minutes showing where the show could've gone had it not been cancelled, and it was a way more interesting show than what most of it had been up to that point.  If that show hadn't wasted it's time getting to some of those potential storylines, maybe it wouldn't have lost so many from it's built-in BSG fanbase.  Now I am listening to an inferior version of a show that was inferior, to begin with.

Maybe I went into this set with a bad attitude.  I tried not to.  As much as I don't care for Liv and my feelings on the Robots can only be described as indifference, I really don't want to hate it.  If I am going to spend three hours with a set I'd rather it be good for sure.  And I don't hate this, I just didn't care about it on the whole. 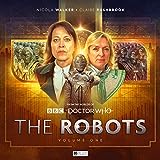