I have found that when it comes to Big Finish, and maybe just anything Doctor Who related, the things I am looking forward to most are the next instalments for the Eighth Doctor and the War Master.  I have long enjoyed McGann’s interpretation of the Doctor...but the evil machinations of Derek Jacobi’s War Master have been really great to listen to.  Luckily, we get the two brought together again here in this latest War Master set. I can say I recommend the set, but if you want some more details I will have some SPOILERS AHEAD:

The set begins with the Master being tasked by the Celestial Intervention Agency with tracking down and capturing the Doctor, who is allegedly up to something the Time Lords are frowning upon.  In the opener The Edge of Redemption, the Master begins his search by putting together a ragtag team to get to a remote planet and find the Doctor, but in order for the pilot to take the Master there, they must steal back his ship.  This is essentially a simple heist story, but it is a great way to launch the story and introduce the new characters.

The Master and his pilot are on the way to the Doctor but are boarded by Space Pirates.  The leader of the Pirates wants to kill the Master as he played a heavy role in her downfall.  This episode, titled The Scaramancer after the lead pirate, ends in a great big twist.  I had been thinking that usually in the War Master sets, he plays the good guy for a good chunk until it no longer serves his purpose, but even then you can usually tell he is scheming. I had this weird sense that he was seemingly being too good this time around and that maybe Big Finish was starting to make him seem too much like the Doctor, they were lacking that underlying sense of evil that usually comes with the character.  And then they drop the bombshell...he isn’t the Master at all...but the Doctor.

The third episode, The Castle of Kurnos 5, goes back and explains how the Doctor ended up looking like the Master.  In essence, the Master is planning to get some sort of grand weapon created by a long-dead crazy Time Lord scientist, so the Master resurrects his mind on a planet where the Time Lord once set up shop, but the Doctor is on his tail trying to figure out what he is up to. But the Doctor snooping around was all a part of the Master’s plan.  He intended for the Doctor to find him, swap bodies with him, which while the Time Lords wouldn’t be fooled for long, would at least give the Master enough time to get away and make his way to the weapon.

The set closes with The Cognition Shift which has the Doctor (in the Master’s body) finally catching up to the Master (in the Doctor’s body) and finding a way to put a stop to the Master’s evil plan...which is one of his bigger and more mad ideas.  The true joy of this finale is McGann having a go at playing the Master, while Jacobi gets a chance at the Doctor.  Both are always so good in their usual roles, it is no real surprise that they can also nail swapping them for an episode.

Honestly, I don’t think a Big Finish series has been more consistently good than the War Master.  I love McGann as the Doctor but even I can admit that his sets and ongoing stories aren’t always top-notch.  I usually end up liking them for nothing more than his portrayal as the Doctor.  But the stories in the War Master sets have been so fantastic.  The evil of the Master showcases the horrors of the Time War far better than the Time War sets focused on the Doctor can.  Even the John Hurt sets had to keep the Doctor firmly in the role of hero, but having an utterly evil bastard at the heart of the Time War makes the stories far more engaging than any other foray Big Finish has had into that era of the Doctor Who lore. I can’t recommend this enough. 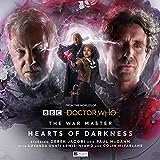