In the fourth volume of the Eighth Doctor’s adventures hovering around the edge of the Time War, he ends up in an alternate universe, deals with multiple versions of Davros, has a total loss of memory of who the Daleks are, before getting caught up in the midst of a Dalek Civil War.  It is, in short, another winner of a boxset from Big Finish, who have been really nailing the time War saga throughout their various sets and series.  Ahead will likely be SPOILERS, but if you are wondering whether this instalment is worth your time if you have enjoyed the Time War series thus far, this is on par if not better than many of the instalments.

The set begins with Palindrome, Part 1 Davros living peacefully, married to a Thal, and working on his scientific endeavours, such as an interdimensional portal that can maybe let folks travel between other universes. But his happy little world is quickly disrupted when Daleks attack.  He and his wife are killed...but he awakes anyhow, but it is a day earlier than it was. And he gets killed one way or another each day, only to awake another day earlier.  The Doctor and Bliss are there, and they try their best to help this version of Davros, but that is difficult when they are travelling through time in opposite directions.  And when Davros meets, well, Davros (a version who seems far closer to what we all know) he is convinced that it may be the Doctor and Bliss who are in the wrong.

Palindrome, Part 2 shows what happens when Davros is merged with all the alternate universe variations of himself, as planned out by the Dalek Time Strategist, and he begins moving forward in time again.  The Time Strategist is plotting to restore the Daleks, who were nearly beaten in “our” universe...and his plan is to use this dimensional portal to merge all Daleks from every universe to supply Daleks with an endless supply of Daleks.  Blow up one Dalek and a new one will pop in its place.  Obviously not an ideal situation.

Beyond all that plot, that is honestly difficult to summarize with its wonky time mechanics, the heart of this episode is Terry Malloy’s latest performance as Davros. He starts off playing a perfectly innocent Davros from another universe, one that never grew up in an endless war, that never grew to despise Thals, one that was never injured and required the use of a travel machine, that never had hate that grew so deep, and certainly never had a need to create Daleks.  This Davros is just a nice guy, married and happily working on his own, more peaceful scientific endeavours.  But after he is merged with Davros from various alternate timelines, he struggles to maintain his peaceful nature.  He wants the Daleks to not hate indiscriminately...but he is slowly losing his own sense of self. His merger leaves him just as disfigured and in need of a chair as the Davros we all know, and while he tries to remember who he was, his hate for Thals starts to shine through.  By the end, he is utterly lost, ordering the death of his own alternate self and wife (again timey-wimey business is about here). Malloy plays it perfectly, from his innocent version, through his struggles losing his sense of self, until he is finally just the evil Davros we have always known.

After such a big epic opening, the set could lose some lustre going forward.  How do you maintain that level?  Luckily while the third story is certainly smaller and scale and intensity, it is still quite good, and leads directly into the big conclusion. In Dreadshade the Doctor and Bliss return to their own universe, but their memories are faulty.  They don’t remember who each other are.  They can remember their names and whether they are human or Time Lord...they have some basics, but there are huge swaths of their memory that are missing.  Unfortunately, this is the case for almost everyone they meet.

Before the mass memory loss, the Twelve was placed inside a Time Lord weapon vault and is in stasis.  In there with her was a Dreadshade, a creature that can be trained to fear a specific thing and then when it is confronted with enough of that very thing will wipe it all out.  It was trained for Daleks, but when the Daleks were wiped out and forgotten, the Dreadshade forgot what it was afraid of...and the Twelve has trained it to fear Time Lords. While the Doctor and Time Lords slowly figure this out, they are also having the sense that the Time War has finally ended, whatever their enemy is...is finally gone. Then the Doctor and Bliss remember the warning they were coming with.  The Daleks aren’t just coming back.  They are coming back with a vengeance.

Everything closes up Restoration of the Daleks, as the Time Strategist schemes to use Davros to restore the Daleks and then eliminate him, restoring the Emperor as well.  It basically leads to a sped-up version of Dalek history.  Davros helps create them, some turn on him over his purity, the Emperor is created and the Daleks follow his word, but then Davros convinces some Daleks to follow him instead, it leads into civil war...it isn’t what the Strategist hoped for.  The Doctor and gang are able to destroy the Dimensional Portal and stop the Strategist’s endless Dalek scheme. The Daleks lock up Davros on the order of the Emperor, who believes there is still some use to be had from Davros.  This pleases the maniacal Davros.

While the Eighth Doctor is not nearly as front and centre during this set, the set does end with a cliffhanger that is very dear to that Doctor...from out of the multiverse came a stasis pod...and within that pod: his great-grandson Alex.  For those struggling to remember in the long past continuity of the Eighth Doctor’s audio run, Alex was Susan’s son introduced during the Lucie Miller days, back in 2009.  He first appeared in a one-off adventure in-between Eighth Doctor seasons, then played a pivotal role in the final season with Lucie Miller, being killed along with many of the Doctor’s friends.  There has been a ton of material both following directly on from those losses, and the Doctor’s Time War stories are meant to be much further on in his history than any of those, but needless to say, this memory being brought back to life should bring up some very personal feelings for the Doctor going forward.

Time War 4 is great.  Maybe the best entry for the series yet. Terry Malloy is such a key part of this boxset that it might as well have been called Davros: Time War as opposed to Eighth Doctor: Time War.  If I had any complaint, it is an echo from a previous set: Bliss does not feel like a fully realized character.  She just feels like “Generic Companion #342.”  She is well performed but has been given no dimension by the writing, no clear characteristics that make her feel unique.  She is just too blank.  Four sets in?  That is a shame.  Beyond that?  This is a hell of a set. 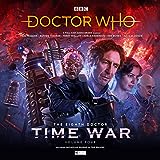