I flat out love Big Finish's War Master series.  It has got to be their most intriguing series of Who spin-off material they currently offer.  Seriously...look at the bulk of their line-up of spin-off stuff. Most of it is friends of the Doctor adventuring and investigating aliens on their own.  The War Master...it is this deep dive into the truly dark nature of the Time War.  Derek Jacobi is so damn good in the role, as he constantly schemes to take advantage of the Time War for his own gain.  Constantly finding some evil plan to wreak havoc in his own way, and use the Time Lords and hte Doctor's preoccupation with the War to have a little fun of his own.

In the latest set, he gets the hold of something called the Anti-Genesis codes, and as such he is able to break an unwritten rule of the Time War...neither side is meant to go back and keep the other side from ever existing.  That is how the war started essentially (as the seeds of the Time War were essentially planted with the Fourth Doctor story "Genesis of the Daleks" in which the Doctor is sent by the Time Lords to keep the Daleks from ever being created, and fails to do so).

But the Master has his own plans.  He gets the codes, uses it to go back to the moment of Davros' accident in which he was horribly disfigured, and gets Davros to not be in the safety of his lab where he was merely disfigured, but is instead killed by a dropping bomb.  Then the Master himself takes his spot in history...he still creates the Daleks but in his own vein.

It begins to unravel the universe slowly...at first in small ways, but eventually, it unmakes Gallifrey to a point where the Time Lords don't exist. Original Davros created Daleks team up with an Alternate version of the Master played by Mark Gatiss (reprising a role he played in Big Finish's Unbound series from yesteryear) in order to undo the War Master's plan...as it is essentially unmaking reality.

What I love about this series is that the Master doesn't have the counterpoint of the Doctor to stop his evil plans.  He just does downright awful stuff; ruins lives, kills, destroys, emotionally scars people just for a laugh...and he often wins in the end. But in this one, the Master goes to gloat, he finds just a few weak Gallifreyans who know nothing of him, the Time Lords and barely even of the Daleks. And since he had the Doctor killed years earlier...he has no one to laud his accomplishment over...and then even his Daleks turn on him, just as they had with Davros in the original timeline.

And so, the War Master must use the slice of his original reality (the Dalek Time Strategist's ship) to undo the damage. His hollow victory isn't worth dying for...because if it is one thing the Master never wants to do, it is destroy himself.  So he goes back in time, stops his former self, and then is trapped with the Daleks who offer to return his TARDIS to him as long as he helps them and gives them the secrets of the TARDIS...a set up for the next set I am sure.

Anti-Genesis the best War Master boxset yet.  Its story flows naturally and builds brilliantly (it flows so naturally from episode to episode I didn't even feel the need to do an episode by episode review this time around).  I'll admit the third episode got a tad confusing with all the alternate timelines and jumping about...but overall the story was great and I must recommend it for any fans of the Master. 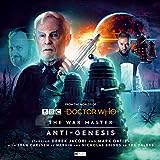