The latest Big Finish boxset starring Paul McGann is the third entry in the Time War series.  This time, The Eighth Doctor and his companion Bliss face off against Multiverses, Planets ravaged by the Time War, A Survivor of an Alien Race meant to be entirely erased from history, and the unexpected return of the Valeyard!

The story begins with a strong vehicle for Rakhee Thakrar's character Bliss (State of Bliss).  This is good because this is the third boxset, and I still feel like I hardly know the character.  Too often she feels like someone for the Doctor to talk to.  No more, no less.  This episode gives her a lot to do, and she carries the whole thing.  Unfortunately, this episode is not a sign of things to come, because for  the rest of the set she feels sidelined into the "generic companion" role.  It's a shame, because it feels like if the writers had any real character with Bliss, Thakrar is clearly capable of pulling it off. But the opener is the only story in this set that gives her any depth.  It's one thing McGann's other ongoing boxset has over the Time War series, Liv and Helen have personalities. They aren't my favorite companions, not even for the Eighth Doctor, but they seem to have some depth written into the characters that Bliss mostly lacks.  Still, this is a fine episode to open the set because like anything Time War related should, it really explores the consequences of the War.

So to does the second entry, The Famished Lands, which dives into a planet which has been turned upside down as a side effect of the Time War.  It's a planet that has limited resources of it's own, and relied on trade to thrive...but the Time War has cut off their supplies, and society has broken down.  A story like this, where the Eighth Doctor has to try and help a troubled world effected by the actions of his own people...well that is exactly what I want from this particular series.

The third entry is Fugitive in Time, and in order to help the people of that planet, the Doctor does a favor for Major Tamasan of the Time Lords...if he helps her, she will help out the little planet he wants to save.  But of course her mission isn't so easy.  They are meant to track down an alien whose race was meant to be entirely erased from History by the Time Lords, find out why she survived and make sure she joins the rest of her race.  This doesn't really gel with the Doctor's usual modus operandi, so it gives him some moral quandary to deal with.

The set closes out with The War Valeyard which sees the return of Michael Jayston to the role, but this time he believes himself to be the Doctor, fighting the Time War on the front lines...though he seems to be battling himself, caught in a time loop.  The Eighth Doctor is of course concerned by his very existence, as he believed he had wiped him out when his Sixth Incarnation had regenerated.  This is a very entertaining end to the set, and it is always fun to hear Jayston's voice.

On the whole, I'd say this is a pretty stellar set. It has good stories, good acting, and fun Time War concepts.  If I had a complaint, it is that beyond the opener, Bliss doesn't have nearly anything to do.  Maybe that is why she carries so much of the opener, they knew they were going to waste her in every story that followed. But even with that complaint, there is a lot to like in this set. 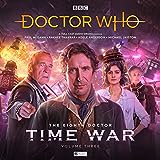