The War Master: Rage of the Time Lords (Big Finish)

As much as I have enjoyed Big Finish's exploration of the Time War the last few years, I don't think any series they have running explores this corner of the Doctor who universe better than The War Master. While the Gallifrey series has taken to exploring the political consequences on the Time Lord's homeworld in an interesting way, it is still exploring the earliest days of the conflict and is all about the political strife that comes with it. The War Doctor and Eighth Doctor series did/do a  good job of exploring the Time War and it's effects on the universe, but the Doctor as the lead character does limit how far they can take the concept.  Even the War Doctor has to be inherently good, otherwise the audience may turn on him.  They could only take the character too dark.  But that isn't the case with the War Master, you can take him as dark and deep as you want, as as such, you can really explore the cruelest aspects of the Time War.

Throughout Rage of the Time Lords, the Master is collecting unique individuals for nefarious reasons (what else), and this plot begins with The Survivor.  He has infiltrated a small rural British town during World War II, posing as a Minister and has taken a particular liking to a young girl named Alice.  He tricks her into causing some trouble, culminating in her hurting another girl, and then he exploits this to turn the entire town against her, and then takes her away.

In The Coney Island Chameleon the Master chases down an Italian Strongman and a girl who can change her skin to match her surroundings (even taking on the properties of brick walls and velvet curtains), seemingly after the young girl and her powers.  Here the Master doesn't make any attempt to play a good guy, and is more of a sinister figure from the outset. First offering to buy the girl, then chasing them down until he gets what he wants.

From there we travel off of Earth, to a facility where the Master has been keeping all of his specimens. We find that he is working on creating some kind of weapon from all these beings he has collected and caged.  The Master is searching for the very thing that will complete his project, the titular Missing Link, and finally he arrives:  The Doctor.  Obviously a big draw for this set is that we get to hear Derek Jacobi's Master face off with Paul McGann's Eighth Doctor.  And it's worth it.  The moment McGann shows up I perked right up....and I'd been loving the set up this point.

The big finale for the set comes in Darkness and Light, and sees the Doctor forced to help the Master as his creation, The Rage, breaks loose in the facility.  It's a great ending to the set, fun to hear Jacobi and McGann spar...and the conclusion for the Doctor is painful and sad...but totally works.

The set is excellent. Not a bad story in the bunch.  The build-up to the Mastyer's plan, the introduction of the Doctor in the back half, the reveal of the Master's scheme: it is all perfectly executed.  And the fact that the Master is a villain means that Big Finish can truly explore the most sinister aspects of the Time War.  Highly recommended. 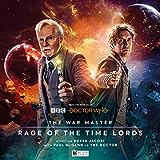