‘Muse of Fire’ is the first of two Big Finish releases that graced listeners in December of 2018. The fifth seventh doctor release in a row, it saw the return of the popular Ace/Hex companion team and plonked them down in 1920’s Paris at the height of an artistic boom. Not only that but it features the return of Iris Wildthyme and her long term companion and friend- Panda. I must confess to being something of a humbug when it comes to overtly silly Doctor Who stories. I must also confess to not having experienced much Irirs before (indeed I had only heard The Wormery) and so I wasn’t really too excited about this particular release. However, I can not only claim it to be the best main range release of the year thus far, but I must also thank it for starting my obsessive love affair with a certain 10-inch tall panda….

Written by one of the real shining stars of the Doctor Who world, Paul Magrs, Muse of Fire is a multi-layered incredibly rich piece of storytelling that weaves an eccentric comedy around themes of art and poetry. It pits the TARDIS team against Iris and Panda with ease and manages to further the Doctor and Iris’s relationship, not as easy as it may sound given that she was first introduced into the Whoniverse (or he was first introduced into the multiverse!) in 1998. Of course, Magrs has a certain advantage over some of the other writers who have written for Iris, being her creator. It effortlessly manages to include some moments of genuine tension, even if the situation is absurd, without giving us any jarring shifts in tone. The concept of the Doctor immediately mistrusting her, particularly in this incarnation, results in some wonderful moments- with Magrs getting in some great digs at this ‘era’ of Doctor Who.

Katy Manning and David Benson are of course two of the highlights of this release. In the previous series of Iris Wildthyme (which thanks to this release, I recently binged when travelling), their team of Iris and Panda proved to be one of the prime points of amusement and the fact that it took them this long to meet the Doctor together, is criminal frankly. Admittedly some of their…’vices’ are toned down a little, though this is to be expected, given that this is a Doctor Who and not a Wildthyme release. Benson takes a little longer than Manning to enter into the story, however when he does I had to stop the playback in order to wipe the tears from my eyes. Panda’s dynamic with Ace will surely reduce any hardened Doctor Who fan to sobs of laughter. Not only that but whenever I sit down to write another Doctor Who review, I won’t be able to not picture Panda ripping into Dali.

The regular Tardis team all get some great moments and it’s nice to see this particular trio in something a little more light, though still containing an incredible richness. Phillip Oliver shows a talent for comedy and he takes an immediate shine to Iris, indeed perhaps somewhere out there, there’s an Iris and Hex miniseries waiting to happen? Sophie Aldred has some wonderful moments, particularly with David Benson and McCoy manages to play the straight man beautifully, this darker Doctor seeming a little lost amidst all the madness. Yearning for the past is almost always a bad idea, however, I’d still indulge in any more one-off adventures featuring this team reunited.

All in all Muse of Fire is an incredible piece of work. The highlight of the year. 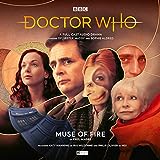