‘The Dispossessed’ is the second entry in this year’s Seventh Doctor trilogy (or should that be pentology?). Mark Morris’s tale see’s the Tardis team of the Doctor (Sylvester McCoy), Ace (Sophie Aldred) and Mel (Bonnie Langford) trapped in a run-down tower block, with no-way-out. Taking the basic small-setting small-cast mold, The Dispossessed,  utilises the aforementioned interesting setting of a condemned tower block incredibly well and merges this with portals to other worlds, zombies and eccentric characters.

Mark Morris’s script is really the star of the show here and he appears to have really let his imagination go wild. What emerges is a complex mishmash of intriguing ideas, settings and characters. From Arkallax, the villain himself and the setting and the idea of an endless night all providing a haunting atmosphere. Morris also provides McCoy with easily some of the best writing he’s had in a long time. There’s a moment in part two when he’s trying to find out what he can about ‘Ruck’ and the mysterious, darker seventh doctor really comes to the forefront. Where other Doctors would of perhaps been a little more emotional, McCoy’s responses show that he cares but still remind us that he’s an alien. The final sequences of part four, in a bizarre mindscape wherein he confronts the Villain, show McCoy at the height of his powers.

Nick Ellsworth gives a wonderful performance as Arkallax, particularly in the sequences when he’s entertaining Ace and Mel in his flat. Stirling Gallacher is particularly rousing as Isobel, providing a number of laugh out loud moments. An interesting moment occurs when we don’t really know which one to trust and the sequences of them both explaining their backstories are intercut, providing some mystery over who to trust. I have to confess that Morgan Watkin’s character of Ruck and Anna Mitcham’s Jan, left me feeling a little bit cold. This is nothing to do with these two actors wonderful performances, but the characters I couldn’t help but feel were a little cardboard and lacking in any real depth or substance. Mark Morris has tried to tackle some interesting issues and I give him kudos for that, though unfortunately, the slew of interesting ideas within this story means that these deeper themes are a little swamped. The result is Jan and Ruck are not the strongest supporting characters.

The Dispossessed also suffers from re-using a large amount of the soundtrack from the previous months Red Planets. On the surface, this may not seem like a particularly bad idea, though the result is that an incredibly atmospheric and dense script with lots of intriguing imagery, isn’t really given an effective soundtrack to match. Moments that really could have been awe-inspiring are hurt by using themes that don’t really fit.  However then later on, particularly towards the end of part three, there’s an incredibly effective piece used around one of the big reveals that provides an incredibly powerful moment of tension. Not too long after that we revert to stock ques used in Red Planets.

The Dispossessed is a highly enjoyable tale that highlights the greatness of McCoy’s Doctor. It may fall flat on a few points but the real star of the show is McCoy and Morris’s script, which results in easily one of the most entertaining stories from this year's main range. 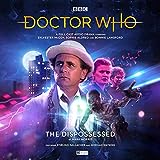