Hour of the Cybermen (Big Finish)

Hour of the Cybermen, is the second entry in this year’s UNIT themed multi-doctor main range trilogy, following on from the previous The Heliax Rift. To that end, it features the return of a number of characters from that story namely Blake Harrisons as Daniel Hopkins and Russ Bain as Colonel Price. Of course, for many fans, however, the main draw of this story is the return of David Banks and Mark Hardy as the Cyber-Leader and Cyber-Lieutenant respectively. The 80’s Cybermen have a curious longevity about them that make them something of a fan favourite. Whilst the Cybermen had already had several reinventions by the time they appeared in 1982’s Earthshock, this new version was so utterly modern and completely terrifying yet somehow evoked memories of their previous designs. Add to this Banks’s portrayal of a Cyber-Leader that somehow manages to have underlying currents of emotions, whilst debating their usefulness. Banks would return to play the role in three more serials; The Five Doctors, Attack of the Cybermen and Silver Nemesis, whilst Hardy would return in just two (The Five Doctors and Nemesis). Since then Banks became something of a ‘spokesperson’ for the Cybermen, writing an original novel and a ‘history’ of the Cyber-Race. However, it’s always been something of a missed opportunity that he, nor hardy, never got to reprise their roles for Big Finish….until now. So does Hour of the Cybermen provide the triumphant return for the Cyber-races two stars?

Well yes and no, depending on your expectations. What hour isn’t is a dark exploration of what it means to be a Cyberman, along the lines of Spare Parts or The Silver Turk. No, Hour is more the Cybermen as ‘monster of the week’, featuring them using a dehydration weapon in an attempt to take over the earth. It’s pretty classic ‘alien invasion’ storytelling. However whilst the general plot may be somewhat basic, the way in which the story chooses to get from point A to B is not. There’s a hefty helping of ‘Sawardian’ nastiness in the way that some of the characters are dealt with and several brutal and distressing descriptions of Cyber-conversion. The story also chooses to play with our expectations of those characters we’ve already met in The Heliax Rift. Whilst the decisions these characters make may not always be wholly…convincing (without giving too much away, motivation seems somewhat thin for one individual), the grim, bleak world that Hour takes place in allows you immediately sympathise. Not only that but the story brisks along with so much pace that you can easily forget it, with a heavy emphasis on Cyber-Action.

And what of Banks and Hardy themselves? Well in a word they are superb, it’s like they never went away. Banks, in particular, gets plenty of time to shine, including uttering some of his most famous catchphrases. However, it is his scenes with Russ Bain’s Colonel Price that he really gets to shine. In these moments Banks is utterly terrifying, reminding us immediately why his Cyber-Leader was such an imposing figure when he first stomped onto our screens in 1982. He also works particularly well against Colin Bakers Sixth Doctor, who seems to be relishing his first Cyberman story in quite some time. Their final confrontation is a hell of a moment and builds expertly on the tension achieved in what is an almost non-stop action thriller. Blake Harrison impresses again as Daniel Hopkins and is certainly given plenty of chances to show off his range, as does Russ Bain. Newcomers Frog Stone (Riva) and Wayne Forester (Atriss) are also given plenty of chance to shine, with my only regret being a lack of exploration of Rivas part cyber-conversion.

Hour of the Cybermen is a thrill-a-minute action adventure that manages to take two icons of 80’s who and give them the comeback they deserve. Highly recommended. 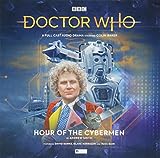