When Big Finish began their River Song series, I was initially quite excited. I had really warmed to the character, and so the idea of her living on for further adventures on audio, at a company that consistently releases entertaining stuff, thrilled me, to say the least.  But the first boxset actually left me quite indifferent to the idea of even listening to more. It wasn't bad, and it had Paul McGann in it...but it felt like it was missing something. In preparation for this review, I decided to give the second boxset a whirl, just in case it had some lingering plot thread I might need to fully understand this newest set...and I found myself enjoying it a lot more than I had the first set.  Maybe it was better plotting, a more engaging story, or if it was just the timey wimey Doctor crossings featuring both the Sixth and Seventh Doctors in the tales...but whatever it was I felt was missing from that first set, seemed rectified by Series 2.

Some SPOILERS may be ahead, as it would be somewhat impossible to talk about certain episodes without discussing plot revelations in earlier episodes.  Reader Beware!

So we come to this third box set of River Song adventures, and from the word go it is quite exciting.  The opening story, The Lady of the Lake is slightly intertwined with the Eleventh Doctor story A Good Man Goes To War, which was the episode that finally revealed just who River was. We find out here that River wasn't the only thing Madame Kovarian experimented on at Demon's Run, they also took River's DNA and created seven other Time Lord hybrid babies...basically River's own brothers and sisters...and she has to stop one of them that has gone a bit mad due to the mysteries of his regenerative nature.  It's an exciting opener, with lots of wonderful bits, character moments, and a tremendous pace.

The second story has the River playing companion to the Fifth Doctor, along with a previously unknown companion known as Brooke. They land in Vienna in the 18th Century and end up on the trail of murders and mystery...as things so often tend to go when you travel anywhere or anywhen with the Doctor.  It is basically a solid Fifth Doctor story, from the point of view of River Song.  The big reveal of this episode is that Brooke is not who she says she is when in the end she attempts to kill the Doctor. using the same means as the murders of the episode. River is able to save the Doctor, the question remains what to do with Brooke, and just who is she?.

It is quite clear that the River Song series is taking it’s time travel shenanigans and story structures from the Eleventh Doctor era, and that is probably most evident in the third story in the set, My Dinner With Andrew which plays with time travel and hopping around more than most. it is a quite entertaining, though just like the Eleventh Doctor era it moves fast and sometimes needs a bit of relistening in order to get the full picture of what is going on. I rather liked this one, but I did find a few things hard to keep track of...such as which River is which, but ultimately it is a fun story with good performances from Kingston, Davison, and co. The story also brings back Madame Kovarian, and reveals that Brooke is, in fact, another DNA clone of River hoping to succeed in killing the Doctor...which she does, only his Fifth Incarnation.

The final episode of the set reveals that there are several other clones of River still alive, with Brooke being the favorite. Kovorian's plan seemingly succeeded, but killing the Doctor so early in his time stream has catastrophic results for her.  She begins to see ghosts and then becomes the target of a new radical faction that wants to destroy her, for just as her plan to kill the Doctor was meant to stop him from destroying the Universe, her killing of him ends up doing just that, so now she is seen as the cause of the Universe ending.  The episode is really, at its heart though, about River and her sisters.  Brooke has a taste for killing now, even killing one of her own sisters, and the sisters are all completely warped by Kovarian, can River somehow get them to come around against Kovarian and maybe undo the killing of the Doctor and thus save the universe?

SPOILERS...the Doctor lives.  This should be surprising to no one that they haven't killed the Doctor off in his Fifth incarnation, the means about how he is saved is where the story is interesting though, and that I will not spoil.  This is a good box set, with a story and structure that heavily ties into the Eleventh Doctor's era of stories, any fan that enjoyed the time hopping and intricate plotting (and even major plot elements) that shaped that era of the series will probably find something to enjoy in this set. 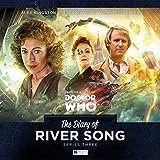