There's a new Time Lord on the block….

The planet Funderell is a strange place. The whole surface is an ocean that you can walk on….but stand still and you will sink. Underneath the surface a myriad of giant electric eels flicker in the darkness. The eels are known locally as Sleeks.

The other indigenous life on Funderell are the Wavewalkers, a group of hunters who live in floating villages. They roam the surface using giant balloons to help keep the surface tension beneath their feet as light as possible. A ship has recently crashed on the surface of Funderell, the occupants of which have an uneasy alliance with the Wavewalkers, studying them from a distance.

The Doctor and Romana arrive, and the TARDIS sinks below the surface, leaving them are stranded. We soon discover that one of the survivors of the crashed ship is Sartia, a very old friend of Romana’s….but all is of course not quite what it seems….

I have to admit, the opening to The Skin of the Sleek did not grip me. It is essentially around twelve minutes of exposition about the Wavewalkers, a lot of which is done in a West Country accent to show that the natives of Funderell aren’t the brightest, or the most advanced. This annoyed me a tad as I am a very proud Bristolian with a slight West Country twang myself. I consider myself to be quite bright, and have a good grasp of technology…. but this seems to be the ‘go to’ accent when trying to depict a village of simpletons. Don’t worry Big Finish – I’ll get over it!

However, once the exposition is over, the story quickly becomes quite a gripping one. The planet itself reminded me a lot of those videos of people walking on the surface of a large vat of custard. It’s true – if you don’t believe me look it up – custard has the same viscosity of the surface of the planet Funderell. You can walk on custard, but if you stand still you will sink – I wonder if this was the initial inspiration for Mark Platt’s story?

Funderell is quite brilliantly realised, with slow moving, rolling waves that never break, and surface currents that can snatch you away. There is real evidence that a lot of thought was put into it’s creation. The Wavewalkers are also a great  concept for a people. They are fiercely loyal to their God, and are in possession of a strange book that seems to tell the future, including the arrival of the Doctor. It is all very intriguing.

Alongside Tom Baker and Lalla Ward, we have Joannah Tincey as Sartia, who is a fantastic new character that enables us a glimpse of Romana's (or ‘Mana’ as Sartia calls her) history. The end revelation is no surprise, (the cliffhanger is very well executed) but I do hope Sartia is a character that will crop up again in the Big Finish range. Of course this being part one of two, I have no real idea as to her fate as yet – but I hope that she survives.

Other cast members of note are Alan Cox and Kieran Hodgson who play the other two crew members of the crashed ship, there is also Alex Wyndham, Jamie Newall and Jane Slavin who play various Wavewalkers…..we also have John Banks as the voice of the sleek.

There is something mysterious happening on the planet Funderell……and so far everything points to the Time Lords of old being involved - bring on the next installment!

The Skin of the Sleek is available from Big Finish now as a digital download or an audio CD. 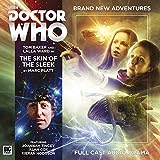