Doctor Who - The Early Adventures - An Ordinary Life 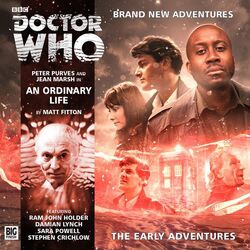 Whilst safekeeping the Taranium Core, which powers the most powerful weapon in existence, the TARDIS crew are diverted to London in the 1950s. The Doctor has been rendered powerless to move or act and this forces his youthful friends to somehow take the initiative minus his wise advice. Both acquire jobs that get them out of their comfort zone - Steven at the docks, and Sara in the kitchen - and they also have to live frugally and in conditions which bring their comfy upbringings into sharp relief.

They befriend the Newman family who are trying to establish themselves in Britain having left Jamaica behind. And whilst their new home is one rich in opportunities and resources, its inhabitants are decidedly mixed in the level of open-mindedness and welcome. This means that  Steven and Sara are forced to react to a hotbed of xenophobia - something particularly hard to imagine for a woman used to 40th Century Earth.

But deplorable human qualities are not the only adversary, as it soon becomes clear that the time travellers are late onto the scene of an invasion where people are being kidnapped and used as hosts for a force of non-humanoids. Their intentions being to redefine the dominant lifeform on the planet.

This four episode story starts off much along 'pure historical' lines with hints of the paranormal that eventually takes over. Having two characters from the future forced to get their heads round a time full of racism is a great launch pad for this story. In the context of The Daleks' Master Plan, we can reflect that Mavic Chen is not regarded as a villain in any way of his ethnicity, but instead due to his narcissistic and delusional personality.

Steven again is confident in coping with the new and unexpected, which fits his character outline of the 'fearless pilot'. It is also a neat idea to force this skilled man into rather banal manual work, but he still has the ability to work in a team and be unassuming and contrite. He almost gets into too much trouble, standing up for the bullied. The snarl of "You'll get yours Taylor" reverberates in listeners' heads - although Steven is not present for that threat. Billy Flint (Stephen Critchlow) is a fine secondary villain, and certainly disturbing enough in his bigotry. But the themes of prejudice are almost shoved to the sidelines; the emerging story of the hostile alien force with no regard for creed or colour is familiar enough territory and plays out with the usual beats we have come to expect from this type of science-fiction,

Sara is given some respectable material herself, but doesn't quite stand out in the manner she did in 'Masterplan'. Due to her forthright personality and the attitudes of the other women native to this society, she takes on an 'early feminist responsibility'. This is of some interest as presumably gender politics are barely relevant in the far future she originates from, and where she has a high security rank. The scenes where her military training comes into play somehow end up being more amusing than compelling, and perhaps should have had more thought put into it. Even Jean Marsh does not seem quite sure how to play this one way or the other.

Potential romance with these two companions of the original Doctor is hinted at several times in this new story. Obviously this was not shown overtly in the family show 1965 Doctor Who undoubtedly was. However, this is quite welcome as Jean Marsh and Peter Purves clearly got on back then and still get on now, so it feels quite a natural translation in acting performance by two fine actors

The Doctor being involved quite late on allows for much good material for the companions, but once he really takes charge the character work for Steven and Sara is almost thrown to one side. Also frustrating is that some of the Time Lord's lines are right out of the 'dandy' Third Doctor's speech patterns and feel quite jarring  - even if those two Doctors were two of the more egocentric of the pantheon. Otherwise the plot, the motivations of the aliens and the themes merge well in final stages, after perhaps a slightly clunky transition during the third instalment.

Some naysayers will point out that the total absence of the Daleks is a missed opportunity given the core topics explored in this play. But this should not obscure the achievement of getting two busy actors in Marsh and Purves to work together. Jean Marsh has been in many cult or classic films and is a very compelling actress by any standard. She has not been as involved in spin-off Doctor Who as often as some of the other ex-companions, but still comes across as comfortable returning to her short-lived role. And she might well have thought her effort would be long forgotten back when TV was essentially 'one-off theatre', and in the pre-video era. Purves is a stalwart narrator and does a pretty good Hartnell imitation, if perhaps not the definitive one given the excellent work that William Russell has turned in over the years.

Matt Fitton is a reliable author and shows his skill with the core story aspects that worked for the most part in his 'Counter Measures' stories. The actual enemy in this story is disturbing and unsettling enough, if lacking the sheer groundbreaking nature that was apparent in the Daleks. Also there is some humour sprinkled across which can be engaging and gives life to people who sometimes struggle to act naturally, which is a very human quality and not always used as it should be in scripted drama.

This release certainly helps justify the continued exploration of Doctor Who's black and white days. That was a time when necessity was the mother of invention and many of the strongest aspects that make the show such a juggernaut first emerged. The play is one of the better ones I have reviewed from Big Finish, albeit lacking that je ne sais quoi that defines a sure-fire vintage.

EXTRAS: These are rather brief on this occasion with a reasonable mini-documentary where the cast and crew participate in a laid-back chat over some aspects of making this production. Somewhat jarring statements are made concerning the show always needing paranormal aspects or aliens. The Hartnell era had plenty of pure historicals, and some of the best were in Season Three where this play slots in. Otherwise the insights given into the creative process are well-thought-through.