The Paternoster Gang was originally introduced midway through the Sixth Series of Doctor Who's revival, with Madame Vastra and her assistant/wife Jenny being recruited to help the Doctor at Demon's Run, along with a Sontaran nurse named Strax who owed the Doctor a debt.  They then returned midway through the Seventh Series, where a few prequels set up that the duo became a trio when they brought Strax back with them, to act as their butler and in their investigations.  They made a few appearances during the rest of Series Seven, and also played a role in the Twelfth Doctor's debut story.  They were fairly popular with fans, and calls for a spin-off where not unheard at the time.  But showrunner Steven Moffat had enough on his plate with both Who and Sherlock, and his busy schedule meant spin-offs weren't really in the cards.  I also suspect that a period show that would require detailed sets and two of the leads to be in heavy prosthetic make-up was never really going to get the green-light when it mostly appealed to a niche fanbase.

But that is what Big Finish exists for!  They excel at giving every side character a spin-off of their own on audio.  They've certainly doubled down on that in recent years, particularly with the license for the new series opening up new avenues for them to explore.  Sure getting Eccleston, Smith and Capaldi is difficult, and even the game Tennant is so busy he can't really record as any sets as older Doctors...but if you can't get the new Doctors, why not give all of their friends a show! So we have River Song, Jenny, Missy, the War Master, Captain Jack, Lady Christina, Rose, UNIT, even Winston Churchill and new series of Torchwood and Class.  Now the Paternoster Gang gets in on the action, and their adventures are fairly fun.

I was a little unsure how well they would fair as their own series if I am honest.  I remember when I first saw Deep Breath, that as much as I loved Strax, I was beginning to tire of the shtick of Vastra and Jenny.  They didn't really seem like a believable relationship to me.  So I went into this set a little unsure if the team could maintain my interest for a whole set.  Luckily the cast is quite likable in this.  Whether they are fighting early Electric Cars that turn into robots to wreak havoc on Victorian London, facing off with a Bizarro version of themselves (and zombies), or chasing down ghosts in Greenwich...they are a fun team to adventure with.  And this set is worth a listen. 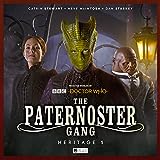