An Alien Werewolf in London is the final story in the Mags trilogy, following on from the previous months; The Moons of Vulpana. The Doctor and Mags venture to earth where Ace has encountered possible Alien activity in Camden. However, not everything is as it seems and they are soon drawn into a war between too factions of a dark society…

like the opening tale, The Monsters of Gokroth, the title is a very clear allusion to what is going on and there are several sequences which reference John Landis's 1982 classic An American Werewolf in London. Unfortunately, like Gokroth, this is not always to the stories benefit as it draws in numerous ‘horror’ elements which honestly made me roll my eyes more than anything. One, in particular, is a classic horror monster which I can only say has been overused in the Whoniverse and writer Alan Barnes has set himself an immense challenge by introducing them here. Sadly he is unable to take them in any new directions and the result is lacklustre villain. Like Vulpana, there is also a strong class element to the tale, with a lot of humour injected this time which certainly makes it a more engaging listen. There are also some great action sequences which push the story along at a good pace until we end up in a hospital and back in pastiche territory.

One of the biggest wasted opportunities in AAWIL is the stories setting. Now admittedly I’m a little biased as I LOVE Camden. Camden is one of the great indie centres of London, full of alternative theatre taking place in the attics of pubs and fantastic street entertainments. Unfortunately, Alan Barnes chooses to only set a small number of sequences here and instead we’re taken to the familiar Doctor Who settings of a sinister villains Mansion hideout. Other locations include a Hospital and the Doctors London flat, whilst the latter is certainly interesting on the whole it can’t help but feel like more could of been done. An issue that has not been helped by placing the location front and centre on the cover…

On the whole, AAAWIL is the best of the Mags trilogy with some fantastic action sequences and intriguing plot elements. However, on the whole, it’s still on the whole something of a let-down. One can’t help but feel like there was so much potential for this series, particularly given the high standard of the Kamelion stories a few months earlier. However once again a distinct lack of experimentation stops the Seventh Doctor’s monthly series from reaching the heights of his contemporaries. Whilst recent standalone adventures such as Warlocks Cross and Muse of Fire have been excellent in the extreme, his ongoing stories remain disappointing. One hopes that the move away from the trilogy format towards individual adventures will result in a greater desire to take risks. 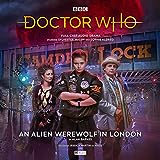