“Are you willing to die for Torchwood, Ms. Sato?”

It is a truth universally acknowledged, that every single Torchwood story in possession of common sense must be in want of a good Toshiko Sato. 2016 saw Zone 10 showcasing the intrepid scientist’s wilder side on a Russian-bound spy mission, followed by 2017’s Cascade testing her hacking prowess to its breaking point, 2018’s Believe delivering one of Naoko Mori’s most disturbing adult sequences and that year’s Instant Karma subsequently plunging her headfirst into the unnerving world of populist political entitlement. As such, this reviewer’s expectations heading into The Vigil, Big Finish’s thirty-first Main Range entry and Mori’s third solo outing, were always going to ascend higher than most releases.

Returning Torchwood writer Lou Morgan’s narrative premise certainly sounded like a winner too: flash back to Toshiko’s early days at the agency, even before Gwen Cooper’s arrival on the scene in “Everything Changes”, to depict the defining moments which drove her to realise her true potential and become amongst the TV show’s most adored protagonists. And the catalyst for this transformative epiphany? One Sebastian Vaughn, a hitherto unknown teammate of hers whose attitude towards his colleagues, work-life balance and social privileges soon came to define Toshiko’s own career – both during his mortal lifespan and, as will become apparent from the play’s opening moments, beyond his untimely demise.

For a play whose immensely accomplished lead star and intriguing set-up hold so much premise, the end product’s more of a mixed bag than hoped, largely due to issues with structural and tonal familiarity that we’ll discuss in a bit. Let’s stick with The Vigil’s merits first and foremost, though, since – as ever with Torchwood’s Big Finish output – plenty of praiseworthy elements rear their heads here. Least surprising of the bunch is Mori’s trademark sterling work as Toshiko, whose journey from a conscientious worker whose self-doubt gets the better of her (particularly with Vaughn’s arrogant, oft-prejudice dismissal of her dedication) to the kernels of her heroic latter self is played out in elegant form via the script and her performance alike. The subtlety with which Mori has her beloved character dejectedly brush off Vaughn’s racist / sexist asides; the gradual transition from compassion for Vaughn’s grieving mother at their family home to disdain for her feeding Sebastian’s self-righteousness; the brutal severity with which she’s forced to distinguish humanity and inhumanity as events crescendo – all flourishes which the Humans and Patrick Melrose thespian takes in her stride to remarkable extents.

What’s more, The Vigil heralds a reunion for Mori not with one of her co-stars from the original series, but instead a fellow member of the jam-packed Mamma Mia! Here We Go Again ensemble (wherein she starred as Yumiko last year). Fresh off his always scene-stealing work as Fleabag’s hapless ex-boyfriend Harry, Hugh Skinner makes his evidently long-overdue Torchwood debut here as young Sebastian. Director Lisa Bowerman chortles in the audio’s behind-the-scenes tracks when recalling how she insisted to casting agents that the search for a “mansplainy, just horrendous” performance was “no reflection on [their] client[s]”, yet Skinner doesn’t half sell the façade. He’s by turns brazenly impatient towards Toshiko’s pre-mission preparations at one point, oblivious as to the circumstances which bring about homelessness at another, painfully unapologetic in his medieval cultural stereotypes and only remotely vulnerable when anyone dares question his worldview, with Skinner’s conviction in each aspect fully enshrining Vaughn as the epitome of toxic masculinity.

Yet Eurythmics’ old saying goes that “behind every great man, there has to be a great woman”. It’s a sentiment which rings inversely true for Sebastian (a man as far from greatness as they come)’s relationship with his similarly flawed mother Madeline, so blinded by notions of patriotism, familial duty and societal superiority that it takes her son’s death to see their emotional fissure and how their egos, not Torchwood, sealed his fate. Just as Skinner hilariously depicts Vaughn’s egotism to toe-curling effect for the listener, so too does Robinson’s portrayal of Madeline succeed in revealing her numerous scarred dimensions, her voice initially channelling complacency and acceptance of Sebastian’s destined place in the Vaughn crypt, only for her all-too-belated yearning for a second chance with him to seep to the fore with pitiful desperation once proceedings inevitably go south.

For this reviewer, the operative word in the previous sentence was “inevitably”. Many of the best plays in the theatrical medium succeed thanks to dramatic irony, forecasting their respective endgames as early as the opening lines of dialogue (see Romeo & Juliet, Blood Brothers or more recently Hamilton for all of the necessary evidence), so perhaps that iconic technique prompted Morgan to render the Vaughn debacle in such a manner that listeners could predict Sebastian’s key mistakes, Madeline’s deceptive apathy and their overall trajectories from the outset. If that’s the case, though, with the aim being to convey a simple tale of how destructive familial and societal nepotism will only breed tragedy, then The Vigil might’ve been better suited to a collection of Torchwood 30-minute vignettes along the lines of Big Finish’s Doctor Who: Short Trips range, since the narrative doesn’t seem to have a great deal to say beyond showcasing the aforementioned damage wrought by such self-serving behaviour while the likes of Toshiko strive to be better. Such issues undeniably warrant discussion across all mediums in 2019, especially in the form of tragedies, but shows like The Good Place and BoJack Horseman are going further right now wrestling with the complexities of morally abhorrent individuals still existing within our lives. Vigil, on the other hand, seems content to put a clear footnote on a far more enduring social challenge.

Maybe that’s simply down to the Main Range format more than anything else – there’s only so much any writer can achieve in a single hour of audio drama, not least when Torchwood by its nature demands the integration of sci-fi elements like the alien leeches which plague Toshiko and Sebastian on their missions together here. All the same, past solo instalments like Uncanny Valley, The Last Beacon or indeed Cascade skilfully blended their more outlandish elements – clones, underground alien signals and sentient viruses – with intricate themes of identity, childhood nostalgia and the shades of grey involved in digital spheres, each packing enough twists to ensure their central message didn’t render the storyline as a whole too predictable. But if The Vigil represents even a stepping stone on Morgan’s path to the Big Finish Hall of Fame, then that she and Bowerman rounded up such a superb set of lead performers to delve into a challenging subject matter bodes promisingly indeed for her oncoming Torchwood output. Who knows - someday it may become a truth universally acknowleged that every Toshiko-led release must be in want of Lou Morgan... 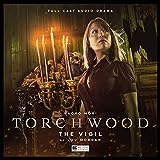