“We all had a hand in this – every damn human on Earth since the Industrial Revolution. We’ve poisoned the planet and opened the door to God knows what else…”

There’s one key rule to which the writers of practically any big-screen action blockbuster will tell aspiring newcomers to adhere, regardless of their chosen medium – end the adventure with a bang. Indeed, even having already mined classic Doctor Who villains such as the Fendahl, carnivorous maggots and the Slitheen to splendid effect in the past three instalments of their themed Torchwood monthly run, Big Finish undoubtedly saved their most ambitious such production for last. Not only does Christopher Cooper’s freshman Main Range contribution deliver a gripping return for another beloved Who adversary with deeply unsettling imagery – the audio drama furthermore plays powerfully into real-world environmental issues which tragically only grow in prominence with each passing day.

To see this month’s playwright tackling such weighty territory might justifiably come as a shock to anyone who’s heard his Torchwood: Aliens Among Us Part 2 effort “Love Rat”, a markedly more light-hearted affair embracing the show’s deliciously raucous side. Yet the premise with which he’s bestowed here is nothing short of a goldmine: trapped aboard a stranded freighter at sea, Rhys Williams must band together with a despondent environmental activist to overthrow a brewing Auton invasion, one incited by humanity’s daily tendency to discard countless plastic fragments in Earth’s waters. Cooper – if this review’s opening quotation didn’t make it clear – certainly pulls no punches when it comes to laying the blame for his narrative’s events (and naturally our planet’s non-fictional turmoil) solely at our Ugg-clad feet. From an early stage, his script forces Rhys to reckon with his own ignorance in prioritising extraterrestrial over all-too-human threats, delivering an impactful analogy for our own culpability in the process. This existentially troubling extended metaphor predictably only serves to worsen as events progress and the stakes mount too, building towards a genuinely shocking resolution whose open-ended ambiguity feels all too apt – particularly given how today’s headlines depict us being at such an existential crossroads.

That said, as with any accomplished Torchwood production at Big Finish or elsewhere, Sargasso has just as much in the way to offer of gloriously pulpy sci-fi chills as it does pointed socio-political commentary. Children of Earth threw in Hub explosions and Torchwood casualties amidst its haunting interrogation of our moral limits, God Among Us Part 2 segued from tales of homelessness to hilarious body-swapping and so Cooper’s high-seas one-off follows suit by regularly ramping up the fear factor at every turn. For every reference to the contaminated horrors glimpsed on David Attenborough’s documentaries, there’s a fantastical sighting like an armada of rubber ducks besieging the ship; for every fourth wall-targeted piece of dialogue surrounding our ethical callousness, an equally memorable visual concept like a Nestene creature with engulfing tentacles crafted wholly from discarded plastic bags. The task of presenting such inherently ridiculous imagery without disserving the vital subject matter might’ve easily overwhelmed a lesser writer, but fortunately Cooper’s shrewd command of the aural medium – coupled with the soundtrack’s eerie infusion of waves and pitch-perfect sound effects for said antagonists – means that we’re afforded enough linguistic detail to tremor, yet with enough restraint to afford our imaginations ample license for vivid interpretation.

And what of the lead star tasked with bringing this 28th Main Range episode to life in the Big Finish studios (after consuming one of their infamously delectable lunches, of course)? Seeing as Kai Owen did such a tremendous job holding the fort in 2017’s likewise horror-tinted hospital jaunt Visiting Hours, that he’s able to afford further depth to Rhys as a no-longer-side-lined Torchwood Three recruit here should hardly come as a surprise. His take on Mr. Williams, far from recycling the greatest hits of his fleeting TV appearances, evolves impressively over the course of the hour, the character’s ever-endearing earnestness and begrudging courageousness giving way to a newfound, all-too-pertinent despondency regarding our species’ future prospects. More inspiring still, though, is how Owen (at the behest of Cooper’s script) passionately pitches this not so much as a gateway to emotional hollowness but a trigger for his world-wearied father figure’s determination to win out, adapting his worldviews and tactics in the hope of enacting greater change – ideally starting with his survival!

He’s not alone in this metatextual quest either: Kaitlin Russell, the aforementioned young environmental campaigner who finds herself in a sudden life-or-death struggle, lies in truly capable hands thanks to Sydney Feder’s righteous performance alongside Owen. Whether she’s angrily relating her efforts to depart from her father’s nature-wrecking commercial exploits, brazenly rebuffing Rhys’ initial assumptions surrounding her generation’s social media obsessions or taking on other roles entirely which we shan’t spoil here, Feder brings a constant ferocious energy to the role which results in a tempestuous yet consistently captivating dynamic between the pair. It’s perhaps a grand testament to the Main Range team’s stellar track record in casting terms that this reviewer would gladly see just about any of the couplings devised so far (or triplets in the case of The Dollhouse), but the extent to which Cooper leaves the door open for Sargasso entries down the line should really prompt range producer James Goss and company to consider the prospect this time around as they set about planning future runs for 2020 and beyond.

Regardless of whether our advice gets heeded, however, for now Sargasso offers more than enough in the way of philosophical substance, shiver-inducing old-school scares from classic Who foes – making only their second Big Finish appearance here but hopefully not their last – and superb performing to bear numerous repeat listens while Goss makes up his mind. By melding Night of the Fendahl’s atmospheric tension with The Green Life’s politically-charged tone and Sync’s sizzling humour (in Rhys and Kaitlin’s dynamic), Cooper rounds out what’s been anything but a quartet of Doctor Who-tied cash-in releases in sensational style, once again raising the bar for his successors to match in future Torchwood instalments. The only question now, both for the Main Range and humanity as a whole – where the hell do we go next? 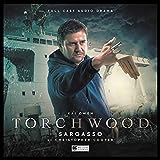