“Maybe we’re so used to doing this that we don’t even want a normal life anymore.”
“Maybe. Kinda sad, isn’t it?”

For never was a story of more woe than this of Captain Jack and his Ianto. Through the ages we’ve seen our fair share of romantic tragedies, both on stage and screen – you-know-which doomed Shakespeare couple, F. Scott Fitzgerald’s Great Gatsby, Titanic’s Jack and Rose, Smallville’s Clark and Lana (no Twitter DM replies necessary, thanks), the list goes on. Despite the menagerie of choices on offer, though, ask Torchwood devotees which dramatic parting of the ways hit them hardest in the history of fiction and their response will doubtless prove instantaneous – the heartbreaking ballad of the eternal Time Agent and the butler-turned-hero whose time ran out in 2009. One only need take a stroll along Cardiff Bay to encounter the shrine in Ianto Jones’ memory still standing tall a whole decade later, or – if they dare – search the couple’s names on any fan fiction site for an enlightening glimpse at the insatiable fervour which this once-rare same-sex sci-fi relationship continually inspires.

So when Big Finish announced their intention to dedicate a whole Torchwood Main Range release, Broken, to Jack and Ianto way back in July 2016, naturally their ‘shippers’ lost their collective minds in anticipation and seemingly turned out in their droves to support the play come release day. This reviewer can’t even begin to imagine, then, just how rabid the reaction must’ve been in some circles to the subsequent news that Serenity, the Range’s 29th-and-counting chapter, would take this focus a step further, envisioning the pair as an official couple living in domestic bliss. Surely such a premise must inevitably yield audio perfection, especially when the lucky scribe injected some hysterical sci-fi setpieces a la “Something Borrowed” or Aliens Among Us’ “Aliens & Sex & Chips & Gravy” for good measure? Well, the answer to that seemingly obvious enquiry – and thus your overall mileage – will depend on your expectations surrounding the franchise’s tone, specifically in regards to the prominence (or lack thereof) of its science-fiction trappings.

A word of warning before we progress any further, though: whilst most of the time Big Finish’s marketing team will proudly trumpet their upcoming releases’ respective USPs from atop the Shard, featuring returning villains on their cover art or hinting at the outrageous sci-fi concepts in store via their tantalising synopses, that’s not quite the case here. Returning TV Torchwood writer James Moran clearly discussed with the promotional department which elements of Serenity to shout about from the rooftops and which to keep hidden if possible, meaning that our description of what this entry has to offer will be necessarily limited so as to preserve the surprises for first-time listeners. What we’re able to say without hesitation is that events centre on Jack and Ianto’s induction into Serenity Plaza, a supposedly idyllic gated community where residents banter harmlessly over who’ll win the Best Kept Lawn competition, bake each other delightful sweet treats and occasionally, just occasionally, go astray for reasons unknown; so begins our tag-team’s covert investigation amidst their lovesick façade.

If all of this initially sounds like a fun recipe for entertaining social satire, rom-com-riffing chaos and the odd action-packed bout of alien intervention, then you’d largely be correct in that assumption; hilarity frequently ensues courtesy of Ianto’s growing infuriation at his neighbours’ constant sexual innuendos, an all-manner of saucy mischief occurs courtesy of Jack’s irrepressible charisma and ultimately Torchwood’s trademark extraterrestrial carnage brings proceedings to an explosive head come Act 3. Yet that last point illustrates the issue which may arise for listeners (as it did yours truly) who seldom came to the show in search of its take on domestic comedies with a limited number of sets and ample romantic tension like Gavin & Stacey, Friends or Benidorm; much as the premise brings its own inevitable call-backs to classic horrors like Stepford Wives or Invasion of the Body-Snatchers, virtually two-thirds of the running time here becomes dedicated to the aforementioned mistaken identity humour rather than building up any of those hit films’ supreme underlying tension. Such a trade-off feels all the more ironic in this case too given that Moran picks up the threads of a past Torchwood tale from its TV run, one which was wrought with the intense suspense and escalating mortal challenges from which Serenity – while naturally a different beast given its setting – could’ve sorely benefitted at times.

Let’s revert back into examining the brighter side of Serenity Plaza anyway for now, since it’s downright impossible to miss how much of a madcap joy the recording sessions for this month’s Main Range play must’ve been in May 2018. As if either of them needed to prove their astounding versatility at this point, both John Barrowman and Gareth David-Lloyd effortlessly run the full gamut here between strained household flirtations (with CCTV capturing their constructs’ exchanges at every moment); poignant, dramatic irony-steeped reflections on their love-life’s prospects in this deadly line of work; vulnerable envy on Ianto’s part at Jack’s constant bedroom dalliances and steeled determination as their chances of survival once again start diminishing. Equal credit should nonetheless go to their co-stars Ellie Darvill, Deidre Mullins and Joe Shire, whose residents’ frequently chuckleworthy one-liners and near-constant efforts to court Mr. Harkness must have tested their capacity to stifle unscripted laughs, yet instead add a huge degree of risqué charm throughout the play.

But arguably the most promising aspect of Serenity’s framework within the wider Torchwood Main Range comes with the content which we’ve sworn not to discuss in any spoiler-provoking detail. What with Big Finish’s remarkable focus on breadthening the franchise’s considerable lore via new recurring threats like the malevolent Committee, or plot strands like the God Among Us’ benevolent efforts wreaking havoc in Cardiff, you could easily forget – despite the continual presence of the old guard like our lead stars here – that the show ran for five full seasons on our televisual airwaves between 2007-2010, each crammed with similarly potent foes and concepts from the 456 to Captain John Hart, who’s now excitingly due a full-fledged comeback in his own boxset next January. Indeed, if they’re to take away one key lesson from Serenity, then we’d wager that future Main Range contributors could do worse than to see the value of mining the show’s TV mythology more-so than before, since at their best, the results of resurrecting said lore with new twists are genuinely thrilling.

Perhaps Torchwood: Serenity will consequently mark one of the few missteps from Big Finish’s Torchwood output for you, as was the case for this reviewer, or perhaps not. Therein lies the infinite subjectivity which makes consuming culture so enriching…when we’re not busy tearing each other’s hair out over which studio should own a fictional superhero character’s film rights, that is. Even so, the assembly of hilarious talent gathered here for a riotous laugh and the increasingly tantalising forays into the show’s past for loose plot threads still serve to demonstrate just how ideally suited the studio was to take this once-deceased franchise’s reins a few short years ago – a romantic entanglement that seems anything but doomed in hindsight. 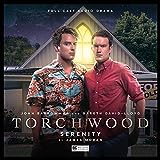