In Big Finish’s anniversary year, interesting choices have been made in terms of subjects from the ‘classic’ era of the show from which to tackle. The first three months saw a number of stories which finally chose to address the Fifth Doctors oft-unseen companion Kamelion and finally give him his due. In terms of the Seventh Doctors stories a more quirky but perhaps equally more inspired choice was made and The Monsters of Gokroth is the opening story in a trilogy which sees the return of punk werewolf Mags from the 1988 story The Greatest Show in the Galaxy. It’s an inspired choice really, one which leaves room for a whole range of possible stories- possibly delving darker into horror that Doctor Who ever has before. After all ‘punk-horror’ is an intriguing sub-genre all of it’s own and the late 1980’s was it’s heyday. Indeed, the slasher and darker horror of the 1980’s is arich resource for Doctor Who to draw upon. The Monsters of Gokroth even seems to promise this, with elements of gothic littered throughout the synoposis. Unfortunately, what results is a story which whilst entertaining in it’s own right- is incredibly pedestrian and draws only from Gothic tropes, not really using the full potential of having an alien punk werewolf with the Doctor.

None of this is the fault of Jessica Martin, who is incredible and returns to her role as if it was yesterday. At several points throughout the story she…’transforms’ and the difference between her two performances are superb. One imagines playing an aggressive werewolf is hardly an easy task, the level of violence and aggression really is frightening.

Unfortunately, that is the only slightly frightening thing within the entire story. Now I don’t want to be too unfair, Matt Finton’s story is a fun and exciting romp and one imagines that perhaps some of the problems faced by Gokroth are far from his fault. As I briefly mentioned in my introduction, the main problem with this particular tale is that it’s just too safe. It draws from a number of classic Gothic horror tropes (the creepy carnival, the hunchback assistant) yet it does literally nothing new with them. Instead the result is simply another Doctor Who style take on classic horror films. it’s difficult here not to review what I have heard, but what I wanted to hear yet one can’t help but feel that the biggest issue with Gokroth is the sense of wasted potential that permeates the entire story. Even with Ace the Punk movement has hardly been touched upon at all and with the Seventh Doctor already having a darker, edgier side- it seemed the perfect era in which to explore these ideas.

Aside from the story, there’s very little wrong with Gokroth. All of the guest cast are fun and seem to be having a blast with the story. In particular, Jeremy Hitchen makes a particularly slimy villain and provides some nice creepy moments with his portrayal of the sadistic Varron. Abi Harris threatens to steel the show however as the bombastic Trella, head of the village and in an unusual move for a character of this kind within the Whoniverse, comes across as mostly sympathetic.

Whilst much of the main range of late seems to have played it safe (with the exception of last years Daniel Hopkins trilogy) with a large number of ‘romps’ it seems a shame that Gokroth is just another in this line. Hopefully, the next two tales will redeem this trilogy and use some of the potential that is unfortunately wasted here. 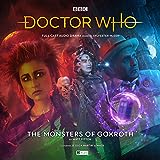