Big Finish’s year of anniversary celebrations has many surprises in store, not least of which was the reveal of a special release for Doctors 4-8. For myself, the most anticipated of these releases was the Fourth Doctors ‘Comic Strip Adaptations’ which had been teased on and off for some time now. The two stories chosen, The Iron Legion and The Star Beast are both from early in the DWM strip and were written by British comics legends Pat Mills and John Wagner. As such, they introduced some of their trademark ‘zaniness’, into the strips which whilst still traditionally ‘doctor who-ish’ had a unique whimsical flare and ambitious scope that set them apart from the admittedly cheap looking Season 17 (which was on air when Doctor Who Weekly debuted). So what of these adaptations then? Coming from such a visual medium, are they able to capture the spirit of their trend-setting originals?

The Iron Legion is the first story in the set and I think it’s fair for me to confess that alongside End of the Line, Voyager, Oblivion and Children of the Revolution it’s my favourite DWM strip. Admittedly then, I was quite nervous about how this would translate to the audio medium. The strip itself is arguably one of the most visual in DWM’s entire run and the scale is beyond vast. Alan Barnes adapts both these stories and given his history with both DWM and British comics, in general, is well placed to do so. With The Iron Legion, in particular, he keeps the main structure and set pieces of the original strip, whilst adding several new but not intrusive elements (which I wont spoil here). The result is this adaptation feels very much like a retelling of the comic original, but introduces enough to make it interesting enough to anyone who is familiar with that story. Toby Longworth and Brian Protheroe excel in their roles as Vesuvias and Ironicus respectively, the latter in particular capturing the character exactly as I imagined he sounded when I fist read the strip.

Of course, any adaptations of the Fourth Doctors DWM strip would have to include a version of The Star Beast which introduced Beep the Meep to the world of Doctor Who. Again Alan Barnes script sticks close to the original story but differs enough to keep it interesting. One particularly pleasing element kept from the strip version is the quirky natures of the humour given to the Doctor, with dialogue being taken directly from the strip itself. Tom Baker in particular, seems to enjoy this quirky and more off-the-wall version of his character (which is saying something) and he gives two intoxicating performances across the set. Rhianne Starbuck is equally wonderful as Sharon and the pair have great chemistry throughout this story. Of course, the real ‘star’ of Star Beast is of course Beep the Meep, played wonderfully by Bethan Dixon Bate. It’s a wonderfully funny and genuinely creepy performance, one that does great justice to such a well-established character.

The Comic Strip Adapations has proven to be a great success and they deserve all the recognition they can get, as the task of adapting two popular and incredibly visual stories for the audio medium must have been incredibly vast. One thing that really comes through with these two audio dramas is just how fun they are. Everybody, from Alan Barnes to Tom Baker to the sound designers, seems to be having incredible fun bringing these two wild and wacky stories to life. They may not be to everyone’s taste, given just how off the wall they are! But I for one look forward to a possible Comic Strip Adaptations Two and of course the four series of Beep the Meep box sets that must surely be around the corner… 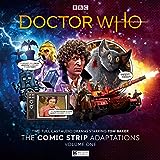 Doctor Who: The Collection - Season 2

Free Doctor Who Events in Liverpool