What with Big Finish’s ever-accelerating expansion into new realms of the Doctor Who universe, from boxsets chronicling the exploits of underserved New Series allies to their ambitious work reviving axed spin-offs like Torchwood, it’s often all too easy to forget that the studio’s roots lie in offering classic incarnations of the titular Time Lord a bold new lease of life. How better to remind us of this noble goal, then, than by transporting us back to the 1960s with the latest Companion Chronicles boxset, showcasing Patrick Troughton’s tenure at the helm of the TARDIS in all its monochromatic, bowtie-donning and frequently base-sieging splendour?

Whereas those content to explore Troughton’s televised adventures alone can only – barring telesnaps or the painfully gradual drip-feed of animated reconstructions from BBC Studios – experience but a minute fraction of those serials in their entirety at present, our lives are different to anyone else’s: we’ve got The Second Doctor Volume 2. So without further ado, let’s dive straight into this nostalgia-laced new collection and discover whether there’s life in a bygone era yet or whether, much like the ancient Cyber Tombs of Mondas, some artefacts are better left buried…

“I’ve walked on the moon. I’ve faced down the Confederates of Brilpoor. But there is nothing, nothing in the universe as exhilarating as riding a dinosaur!”

Had soon-to-be showrunner Chris Chibnall’s 2012 Eleventh Doctor odyssey “Dinosaurs on a Spaceship” aired in the Troughton era rather than the dying days of Matt Smith’s, then Julian Richards’ charming opening salvo offers perhaps the perfect approximation of how the story might’ve played out under such circumstances. Dropping the newly-regenerated Doctor, Ben and Polly within spitting distance of a castle populated by cybernetic dinosaurs, “Curate’s Egg” throws caution to the wind, embracing Doctor Who’s frequent flirtations with the fantasy genre through elements as unashamedly ridiculous as mind-swapping gizmos, talking T-Rexes as well as arguably the best canine-themed visual gag of the year so far.

Will it all seem too far-fetched for some listeners? Quite possibly, although Anneke Wills and Elliot Chapman – working on double duties here, albeit with Ben only featuring in proceedings for 10-15 minutes at most – do a fine job of keeping events grounded with their heartfelt exchanges as Polly and underappreciated scientist Andrew Clarkson respectively, their joint irritation at society’s efforts to side-line them at every turn adding a welcome emotional core amidst all the prehistoric hi-jinks. Indeed, so brimming is “Egg” with potent concepts – not least the Doctor’s underlying efforts to regain his companions’ trust in the wake of his recent “renewal” – that this reviewer couldn’t help but wish at times that Richards had explored some of them in greater detail over the course of his jam-packed hour, for instance by saving one or two ideas for future scripts instead. Food for thought next time around, perhaps.

Anyone well-versed in the increasingly popular art of the meme will doubtless recall one such trending gag which did the rounds on social media in April, come the release of Marvel Studios’ long-awaited cinematic superhero epic Avengers: Infinity War:

Marvel: “Infinity War is the most ambitious crossover in history.”

Apologies if the experience of reading the last 55 words felt akin to learning a foreign language for the first time, but put simply, Infinity War might’ve just met its match in the eyes of Doctor Who fans worldwide with Volume 2’s sophomore instalment. Just as we’ve seen multiple Doctors cross paths in anniversary specials from “The Three Doctors” to Big Finish’s own The Light at the End in 2013, so too does the audio behemoth’s wide-ranging Who license allow them to bring together companions from differing eras of the show at times, and in this case it’s the turn of James McCrimmon to shine alongside one Leela of the Sevateem. In other words: cry havoc and let loose the dogs of war.

Thankfully – not that this should come as any surprise given the levels of acclaim which both stars continue to court with their audio portrayals – neither Frazer Hines nor Louise Jameson disappoint, their hallowed characters’ clash of primal wits so ferociously unpredictable and regularly hilarious that you’ll soon wonder how it’s taken so damn long for this heavenly pairing to occur. That’s for the best too, since the core plot of “Waiter” leaves something to be desired in comparison, its rapid barrage of reality-warping setpieces and convoluted technobabble rendering the TARDIS team’s trip to a deeply sinister garden party even more overwhelming for the audience than it is for the Doctor as his present and future collide before his eyes. Scribe Rob Nisbet has his character drama down to a tee, then, but he’ll still need to work on balancing this with comprehensible plotting in order to craft the next Big Finish masterpiece.

“I suppose that time makes legends of us all…”

It’s worth noting from the outset that Volume 2’s penultimate chapter, John Pritchard’s “The Iron Maiden”, houses all the components of a great Doctor Who serial – intriguing temporal anachronisms by the dozen, an extremely sympathetic central supporting character with whose mind these anomalies predictably play havoc and quite possibly the finest companion of the Troughton years, Wendy Padbury’s Zoe Heriot, taking the initiative as our de facto protagonist this time around. Upon sitting through the credits one hour later, then, imagine this listener’s disbelief at only being left with the following inescapable question: just what went wrong here?

Despite her touching struggle to endure the seemingly endless conflicts of 14th century France, all while realizing that the worst is yet to come thanks to the suspect arrival of First World War technology on the scene, Jo Woodcock’s fascinating prophet-of-sorts Marie is criminally underserved here, lacking much to do beyond trigger the plot with her mysterious visions and prompt Zoe’s occasional epiphanies as she gets to the bottom of the situation. Throw in the disappointing absence of any real suspense – in spite of the deadly weaponry in our heroes’ vicinity – as well as what should’ve been a hugely poignant denouement falling surprisingly flat due to our minimal emotional investment in the ensemble, and “Maiden” unfortunately ranks as the boxset’s weakest link by some distance.

“The Tactics of Defeat”:

Volume 2, in stark contrast to prior Companion Chronicles collections, opts out of binding its four serials with any ongoing plot threads or recurring thematic beats, such that “Tactics of Defeat” isn’t nearly as burdened with tying up loose ends as The First Doctor Volume 2’s “The Plague of Dreams”, wherein Guy Adams faced the intimidating task of endowing the First Doctor with a more fitting send-off than his abrupt departure in “The Tenth Planet”. If the benefits of this procedural structural approach weren’t already obvious to Big Finish upon commissioning the set, then they’re downright unmissable here, with Tony Jones’ refreshingly understated quasi-season finale proving all the more satisfying as a result.

Not dissimilar to “Curate’s Egg”, “Tactics” pairs Zoe with her supposed Foe from the Future – better known to us as UNIT captain Ruth Matheson. Why the change of moral allegiances on Ruth’s part? Is everything as it seems? Both fair questions, but you won’t find us spoiling the answers here; much of the piece’s appeal lies in the constant twists and turns which Ruth’s mission to recover plague-emitting extra-terrestrial technology from a decaying temple take, not least Zoe’s supposed oncoming demise at the vicious hands of unknown assailants. The latter plot element might appear unthinkable given our foreknowledge of events to come in “The War Games”, yet we’re also well aware by now that “time can be re-written”, and indeed future Doctor Who scribes should keep in mind Pritchard’s tense work here as a prime example of how to put gripping new spins on the well-worn paradox-driven story format.

Come for Daphne Ashbrook’s still-endearing work as the constantly resourceful, inspiringly courageous Ruth; stay for one of the more innovative scripts that we’ve seen enter classic Who’s audio pantheon for quite some time.

How much you’ll get out of Volume 2 depends largely on what you expect from Big Finish’s Second Doctor productions – if you’re looking for authentic reprisals of the Troughton era’s unashamedly outrageous jaunts into fantasy territory or surreal mind-trips into worlds hell bent on distorting their visitors’ perceptions, then the fifth Companion Chronicles boxset since the range ceased its monthly output will fall right up your alley. If, however, you’re hoping to see the scribes involved push narrative / creative boundaries given their lack of 1960s budgetary limitations, then barring the basic set-up of “Curate’s” and the brilliant “Tactics” in its entirety, the end product mightn’t offer quite as much bang for your buck.

But while we can’t afford the collection with quite the same glowing recommendation as its Chronicles predecessors, rest assured that there’s still plenty of entertainment in store for any Second Doctor fans craving further sustenance after last year’s "The Power of the Daleks" animated rejuvenation. And who knows – if Matt Smith consulted Troughton’s work in “The Tomb of the Cybermen” as part of the inspiration for his portrayal of the Eleventh Doctor, perhaps future stars lucky enough to portray the Time Lord’s allies might follow suit by picking up Volume 2, thereby starting the cycle of legacy anew… 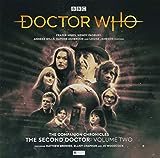