Written By: James Goss
Based On The TV Serial By: Douglas Adams
Released By BBC Books: 5th January 2017

Once in a blue moon, the hardworking, devout people of Zanak experience a 'new golden age of prosperity'. The stars in the night sky suddenly change position, and the economy skyrockets. The natives are assured by their mysterious leader - The Captain - that all this is part of a grand design.

But there is an outlier group of which the are wary, contemptuous, even scared. The Mourners. Looking decidedly pale and skinny, they always wander together, and can bring only trouble. Luckily, the Captain's many armed guards are there to ensure that there is no breach of the peace.

Now enter three odd individuals, in Zanak's main city, with no warning or announcement. The seeming leader is a toothy, excitable extrovert, with a long scarf and curly hair. With him is a somewhat younger-looking woman, much more smartly dressed, with beautiful looks, and a keen intelligence. And lastly, is a diminutive metallic creature, that has a red visor instead of eyes, a little tail that sways side-to-side, and a rather more impressive nose-laser.

The Doctor, Romana, and K9 - as they call themselves - soon make an alliance with a young couple. The male is Kimus: earnest, dedicated and open-minded. The female is Mula: thoughtful, pragmatic and diligent. This in turn leads to the Mourners becoming more engaged in the future of their world, knowing that suddenly a missing piece of information may be missing no more.

Soon enough, the mystique over the Captain evaporates. He is far more machine than man, and with a decidedly twisted sense of humour. But he has a plan or three in motion, and many cards in his deck to play. Zanak, and the wider universe, may both end up facing a change of cataclysmic proportions..

This joint release of both book and audio release sees the completion of the Fourth Doctor era into novel form. For many years, three stories were outstanding, and the common denominator was that Douglas Adams wrote the scripts. In the case of The Pirate Planet, Adams was still an unknown quantity in the wider world when first pitching his first contribution to Doctor Who. By the time this second story of Season 16 - or 'The Key To Time' arc - was transmitted, Adams' other work for the BBC - The Hitchhikers Guide to the Galaxy - steadily became a sensation, and eventually a global phenomenon.

Anthony Read was responsible for editing Adams' scripts into a makeable BBC production. He also made it build on The Ribos Operation, in developing new companion Romana. She was only the second Gallifreyan to assist the Doctor, after his own granddaughter Susan. The story also had to present a different kind of mystery over which item was the segment of The Key to Time.

Later on, Adams would take over from Read, and oversee Season 17 (which suffered especially from industrial strikes). Eventually, he realised he could not focus on both primetime TV, and further contributions to his 'baby boomer' Hitchhikers. Such was Adams' disconnect from Doctor Who, that none of his three major stories were adapted until very recently. (However he did introduce close friend, and second Romana, Lalla Ward to her eventual husband Richard Dawkins). Shada was the last of those three, but hit bookshelves first, with the aid of Gareth Roberts. More recently in 2015, the much-loved City Of Death was also converted into a richly detailed novel.

This new effort has the same author as City, in the form of experienced writer James Goss. Although The Pirate Planet was four episodes long, this book comes in at 400 pages plus - which is considerably more. Goss has clearly taken inspiration from Adams over the years, in becoming himself a successful author, and he decides to put as much of the original script (and related notes) as can fit. This means that this is one of the longest works of Who fiction, and it lacks the pace of action-adventure that is found in both the majority of the classic, as well as the modern, TV format.

Yet, most who are familiar with the TV original must concede that whilst great fun, it is not the strongest production, and really could have done with an American TV budget. Pennant Roberts has done great work for other TV shows, but few would call any of his Who work first-rate. The cast were not all stellar in their readings, with Kimus, Mula and the Mentiads being decidedly bland. This production and acting hurdle is removed entirely here.

The book does some excellent work in making the villains even more interesting. It gives them backstory, and motivation, that is rare to find in most Doctor Who books; and I include some of the best original novels in making that statement. The Captain is portrayed as a lot more intimidating, and macabre in design, as well as having a longevity which is mind-boggling. This also makes the subplot involving his subservience to Xanxia that much more emotive and engaging. The Polyphase Avitron becomes a much more intriguing monster, in contrast to the cod pirate parrot of TV. Goss evokes real sense of dread over the Captain's pet, and makes its lethal potential more credible and unpleasant in nature.

Xanxia - otherwise simply known as 'The Nurse' - is expertly introduced into the narrative. She appears to be someone that could help the Doctor and Romana. How wrong their impressions of her turn out to be! When the facade has fully receded, there is one of Kimus' better moments, in terms of showing some steely resolve. Also good, is the use of novel 'budget' (and reader imagination), as the Nurse suddenly is adorned in royal robes, thanks to the unique nature of her existence.

Mr Fibuli is a touch more likable than in the TV original, and there is little evidence of moustache-twirling cruelty, compared to his sneer and chuckle at the end of Episode Three. He has some inner thoughts that are very 'Everyman', and his brilliant engineering skills feel more layman too. Fibuli's constant awareness that he is replaceable - like any of the Captain's underlings - mean readers care for what fate befalls him. As it turns out, there is a heavy does of irony concerning this end-point, in conjunction with the final chapters' foreboding and tense action.

Although my synopsis suggested the guards were respected, even admired, by the (mostly faceless) Zanak citizens, both this novelisation and the TV story frequently take pokes at them for being witless and predictable. All the same, they are not to be taken as completely benign, and do sometimes make a successful capture, or take out a do-gooder with a well-aimed shot.

Of course, Goss seizes the opportunity to do some nice work with getting inside the heads of heroes as well, and that very much includes K9. The Fourth Doctor is relatively easy to write for, but few can really make him truly surprising and electric on page in a manner that the legendary Tom Baker could on-screen. Luckily, Goss is very much in that select group. The much-celebrated clash of "It is not a toy!" / "Then what is it for?!" is lovingly expanded on, and probably is the highlight of the entire book.

There is plenty of good material for Romana too, as she shows promise that would make her a long-staying companion, and eventually do great things for both E-Space, and Gallifrey itself. She is quick to learn, proactive, and consistently helpful to the Doctor. This sometimes makes the much older time traveller rather defensive. At one point he convinces her to complete a massive timetable, but barely achieves the delay effect he wanted it to. Nonetheless, she still is made to appreciate the Doctor's genius and quick wits, when he is forced to think of a solution to both the threat facing the universe, as well as the key objective of locating the Segment.

K9 is of course secondary to the interpersonal drama, but still a personality; one that has emotions concerning tasks, and opinions regarding those he encounters. His one word summations on his 'owners' would be "odd" and "logical" respectively. The metal mutt's inner thoughts are generally the more light-hearted moments of the book/audio-reading.

And now, time to recognise just how good an audio release this is, for both casual fans, and die-hards alike. Jon Culshaw has never done anything routine, forced, or ordinary to the best of my knowledge, (perhaps with the exception of singing on Comic Relief Does Fame Academy). Even with the weight of ten CDs, or eleven-and-a-half hours of running time, he puts in a wonderful solo performance. There is especially good use of third-person/first-person blending, which means that listeners can be caught out, thinking Culshaw will be talk in his own steady and affable manner, when reading Goss' prose. Much of the music gives this long story clout too. There are subtle strands, and a much more bombastic sense of 'What's Next?' upon the close of another chapter.
I however need to come back to my point on the page count/ running time. This is possibly a case of Goss just slightly getting the balance between quality and detail wrong. The first half of the book, whilst not totally ponderous, does feel slow on several occasions. There are some digressions that display Adams' wit, and thoughtful wonderment at a vast interconnected cosmos, but they do not all feel as organic as in the Hitchhiker's novels (which admittedly used a guide book as the framing device). Thus some passages/moments outstay their welcome. Most odd is the sense of a Season 22 story opening, in that the TARDIS crew take an age to land on Zanak, and get involved.

Nonetheless, the final half of this novelisation  - especially the final third - is so much more urgent and gripping. It particularly delights in improving on the somewhat absurd Episode Three cliffhanger, by having a homage to the modern-day use of TARDIS in-flight to save a falling victim. Also, there is a very funny moment where the Doctor, in deep, deep trouble, thinks how clever it would be to rig a hologram. Thus when he actually does it, it banishes all feelings of indifference over the implausible onscreen execution.

One change I have more mixed feelings over, is the use of the 'Mourners' title, rather than 'Mentiads', which both sounded mysterious and ominous, yet also very funny depending on the particular dialogue context. At least there is much more back-story, and insight into their transformation, and also their "vengeance for the crimes of Zanak". Especially worthwhile is the detail on how Pralix's father was shot down, not long after he transitioned into being one of the select group. This means that the rather dour supporting character is now an angel of retribution, for both the planets and his own lost parent. There also is a change-up in making the Mourners mixed-gender, with at least one of them being female. This elder Mourner is given a few evocative moments in the narrative, helping reinforce how much more progressive Doctor Who was for women in the Graham Williams era, than it had ever been hitherto.

In sum, this is a very important book for anyone trying to get more insight into the Tom Baker period of the show - one which has been analysed and critiqued for many years now. It has a sense of something old, but also something new, and deserves at least being explored in either print or audio reading, if not both. A compression of gems, that is indeed most rich. 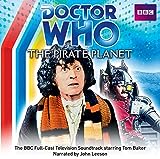